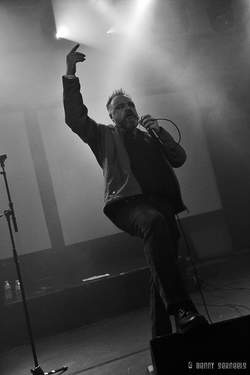 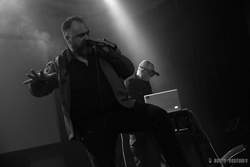 'After the improvisation, I went into experimentation...'

For hundreds and even thousands of electro-industrial fans, Jacky Meurisse became a real cult figure. After starting cult project –Signal Aout 42 back in the '80s, Meurisse, formed his own unique style that led to the formation of what we know as the Belgian scene.

Even though there are already a few decades of the band’s history – Signal Aout 42 are true to themselves. They continue playing and releasing records adding new elements to their well-known sound.

In the interview for Peek-A-Boo magazine, we got a chance to speak with founder and vocalist of Signal Aout 42 - Jacky Meurisse, who told us about his years of experience, the early years of his career, recent Signal Aout 42 albums, his solo-career and future plans.


Quite often, people notice that Signal Aout 42 started from your improvisation with your classmates. What role does the improvisational component play for you in the process of the creation of the music ?

Indeed, SA42 started with school friends and we played improvisation but it didn't last very long. After the improvisation, I went into experimentation. At the very beginning of electronic music in '80s, all the paths were still to be explored and there was therefore a lot of experimentation, which gives an innovative side to it.

SA42 was lucky to be born during this period. Everything was permitted, the public was waiting for new sounds, and I did it. Today I still allow myself to take risks with my compositions but after so many years of experience I trust my instincts rather than improvisation.


At that point, you found your listeners due to your amazing shows – you were using chainsaws and other more or less typical for industrial music instruments. How did you get the idea of doing this ?

My friends and I were absolutely not musicians! We were very young (16) and wanted to make noise on stage. The only way to do it was with simple means. Make as much noise as possible with impressive looks. We were very dumb at the time. But surprisingly, it was so surprising, that it really pleased the audience (laughs)!


How do you remember your first musical experiences ?

Strangely, I've never really been a big music fan. What I like is sounds and atmospheres. Composing is secondary for me. Music, dancing or not, must be a source of energy and must provoke strong feelings. Personally, I don't know why but I am attracted by dark, stranges and violent atmospheres. The first artists I listened to were bands like Fad Gadget, Killing joke, Sex Pistols, Cabaret Voltaire, DAF… these bands are still today my source of inspiration. Some film music also inspired me a lot...my greatest regret is not being able to illustrate my titles with video clips.


Belgium has always been associated with industrial and electronic musical climate, why ?

I don't think it's only the Belgians who make industrial music...if there's an answer, maybe we should look for the surrealist side that's so characteristic of our little country. For the electro-side, I think it's precisely the new sounds generated by these new instruments, the synthesizers, that inspired the Belgians in their quest for originality. It's true that there's a particular Belgian spirit. It's probably the fact that we're a very small country influenced by very different cultures: British, French, German and Dutch. Maybe we have to prove ourselves or maybe we have an heritage from these four differents influences but is certain that Belgians are not so afraid to become ridiculous and maybe we dare to do more than our neighbours. Just remember the new beat (laughs)!


What do you think about the current state of things with the electro-industrial European musical scene ?

As I said earlier, I don't listen so much to music so I don't really know what's going on right now. Of course, I'm not deaf and I hear very good new sounds but I can't give you bands names because I don't know them. Which is a real shame these days, that radio stations and co are always playing the same songs and the same artists. It's like the media / promoters are afraid to play something new !?

Luckily there are still some specialised media / promoters who take the risks to get new sounds ! I know a lot of people who've never heard "underground" music... and when...by chance...they hear it and love it... it means that there is still a lot to be discovered by the public in electro music.


Unlike British industrial bands – Throbbing Gristle, who followed an experience of krautrock bands or Cabaret Voltaire who mixed industrial music with bluesy chords (“I want you”), Signal Aout 42 created a new musical standard – different from these bands. And I guess if we’d speak about “Girls of Vlaanderen” or “Pleasure And Crime”, I may call it “a certain standard” you established but what defined the direction you, as artists, were moving in at that period of your career ?

I never asked myself that question. I've always done what I could do most easily. Making music has always been a way for me to express myself. I worked on instinct and with the means at my disposal. In the beginning there were a lot of imperfections, there always are, but I try to improve every time...(laughs).

I was especially lucky in the beginning to have been loved by the public and to have had several small successes. I still don't understand why I'm so lucky!? Music has always brought me a lot of satisfaction, I've never had a bad experience...it's magical ! Maybe it's because I make music with my heart and don't think about what's gonna happen.


Quite often I ask musicians about the changes in their method of work. How much did your approach change after the coming and development of computers and such software as Pro-Tools ?

Well at the beginning (more than 30 years ago) making music was quite expensive !!! You needed a drum machine, synths, effects, a mixing desk, a multi-track and a lot of space! Then came the computers with the VST plug-ins. It made life easier, I could make music in the kitchen (laughs)! I've never been able to do without a synth... the pleasure of manipulating buttons and seeing the little leads flashing is an incomparable pleasure. Even if it's expensive and takes up a lot of space.


From my personal perspective, it seems that “Insurrection” was not as aggressive and was more gloomy than “Inspiration”. When you usually work on something, what helps you to define the direction you'll move in with the next record/single/song ?

My instinct. As an example for "Inspiration" I thought it was going to be the last album. I thought it was time for me to pay tribute to the artists who had inspired me all these years, so I made some tracks with small references to these artists.

For "Insurrection" it's my state of mind at the end of the year 2018 caused by the world situation that inspired me, it must be admitted that the world atmosphere was (and still is) not very peaceful. For me, “Insurrection” is a bit "the album of anger" and is for me the vision I have of the future if we don't take the right decisions now.

I try to create atmospheres in combination with the titles and themes.


Commenting on your solo-record – “Crystal Blackout”, you noted that there were a number of things you wanted to try, different from the classical Signal Aout 42 compositions. But didn’t you think about making an experimental album, rather than putting it out as a solo-work ? Or did it all come together very naturally ?

“Crystal” was like a recreation for me, I had fun by shaking up the codes. I mixed sounds of different styles, it was a lot of fun. So, it's quite natural that I composed this album.

I like to mix styles, it can give surprising results. Moreover this album was very well received by the critics, it was released on a small Spanish label "Musex Industries".


How do you see your next work ? I guess you’d continue your experiments with SA42…

That's exactly the direction I'm taking! I'm still at the beginning but the main lines are already there! But you'll have to be patient because I work very "slowly"... I work very fast for 10 days, I'm on standby for 6 months and then I go back on full speed for 5 days and so on... until I'm satisfied with the result. I thought, once again, that Insurrection would be my last album, it seems not...(laughs).

AMBER TEASER • We Also Like Putting Some Strange Elements In Pop Music
EMPUSAE • One thing is for sure... I'll never stop making music!
PREEMPTIVE STRIKE 0.1 • ‘I Love The Belgian Scene’
DYLAN WITTROCK • 'Sometimes I just write characters’ thoughts, like journal entries.'
JOE BOYD • Producer of Pink Floyd, Nick Drake, Nico, R.E.M, talks about the years of experience and his coming book.
JOSH KLINGHOFFER (PLURALONE,RHCP) • “I suddenly found the piano the most exciting instrument to write on.”
AUTUMN TEARS • An Interview With Autumn Tears
THE DESIGNS • An Interview With THE DESIGNS
MORE EPHEMEROL • An Interview With Los Angeles Synth Act MORE EPHEMEROL
JHNN • An Interview With Canadian DJ/Multi-Instrumentalist JHNN