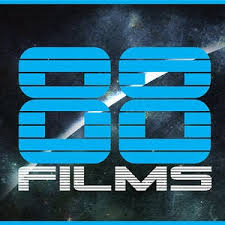 88 Films Goes Back to the Golden Age of Gore…

A CELEBRATION OF TEEN-KILL CARNAGE – UNCUT, UNLEASHED AND UNHINGED!

Ask any self-respecting slasher buff about the genre’s ‘golden age’ and they will doubtlessly wax poetic about the plasma-packed pot-boilers of the 1980s – the decade of destruction that gave us Jason Voorhees, Freddy Krueger and the transsexual teen-tormenter of the Sleepaway Camp series. Given the label’s name, what better way for 88 Films to celebrate this halcyon era of horror than with a series of numbered and collectible sanguine-splashed shockers from the period of VHS and video nasties?

Hence, 88 Films is proud to announce the launch of a new “SLASHER CLASSICS” line – kicking off with a digitally re-mastered DVD release of Don Gronquist’s notorious censor-baiting backwoods sickie Unhinged (1982). Further fearful fun will be delivered with Don’t Go in the Woods (1981) – the effortlessly enjoyable “hunt ‘em and kill ‘em” epic that once had British authorities outlawing its very exhibition! Directed by James Bryan, Don’t Go in the Woods is a catalogue of splatter-slapstick craziness which lines up a group of campers and crushes them in increasingly comical ways. Take it from us: this maddening mash-up of absurdity and arteries really does have to be seen to be believed!

Following on from this bout of bad-actor bludgeoning will be a new BluRay bow for Herb Freed’s student-filleting frightener Graduation Day (1981), in which high school pupils meet a sticky end from a mysterious stalker in a fencing mask. Adding to the onscreen allure of Graduation Day is a cast of cult veterans that includes Christopher George (City of the Living Dead, Pieces), beloved Scream Queen Linnea Quigley (Hollywood Chainsaw Hookers, Return of the Living Dead) and future small screen celebrity, and Playboy cover girl, Vanna White.

Finally (at least for now) 88 Films is proud to present Charles Kaufman's Mother’s Day (1980) – a macabre movie so effective that Hollywood A-lister Brett Ratner (director of the Rush Hour series and this summer’s Hercules) produced a 2010 remake headlined by Rebecca De Mornay. As usual, though, it is the original which packs the biggest punch. Boasting a tone that is both sinister and satirical – Mother’s Day has three female friends accidentally stumble upon the land of the most dysfunctional family this side of Leatherface and his clan. What follows is not for the faint-hearted – indeed, in his original review the late, great Roger Ebert accused this controversial creeper of wallowing in “images of vile and depraved sadism”!!! You can make up your own minds when Mother’s Day arrives on UK BluRay in early 2015.

Each release in this very special collection will boast a numbered spine, additional features, a reversible sleeve and an informative new booklet, with writing on each respective film, from author Calum Waddell – the erstwhile producer of such documentaries as 88 Films’ own SLICE AND DICE: THE SLASHER FILM FOREVER. Most importantly, of course, we can promise uncut and uncensored prints – with each hack em’ up epic looking bloodier and better than ever before!

88 Films, named in homage to the Back to the Future franchise, was launched in 2012 and has become one of Britain’s leading boutique labels – dedicated to the loving presentation and restoration of both classic and marginal genre movies. Choice cuts from the 88 Films’ vaults include HD releases of several features from Charles Band’s Full Moon Entertainment including the Puppet Master and Subspecies series, Stuart Gordon’s crimson-caked creature feature Castle Freak (1995), Demonic Toys (1992) and the pint-sized superhero thriller Dollman (1991). In 2014, 88 Films debuted an uncut print of Alfred Sole’s masterpiece Alice Sweet Alice (1976), unleashed the controversial killer-kids chiller Bloody Birthday (1981) and gave a long-awaited UK BluRay bow to Maniac star Joe Spinell’s frequently misunderstood postmodern coup d'état The Last Horror Film (1982). Along with offerings from Ted V. Mikels (The Corpse Grinders/ The Doll Squad), the Sherilyn Fenn-starring softcore romance Two Moon Junction (1988) and the 42nd Street staple Bloodsucking Freaks (1976), 88 Films continues to brings an eclectic mix of movies to the UK home video market. The very first 88 Films’ BluRay steelbook also made an appearance this year thanks to a wonderfully presented pressing of the Troma terror-trademark The Toxic Avenger (1984), which has become the company’s best selling release to date. Forthcoming fright-flicks from 88 Films include the Sam Raimi-produced zombie nightmare The Dead Next Door (1989), directed by J.R. Bookwalter, all three sequels to The Toxic Avenger and some more stuff we would love to tell you about but, if we did, we just might have to kill you…