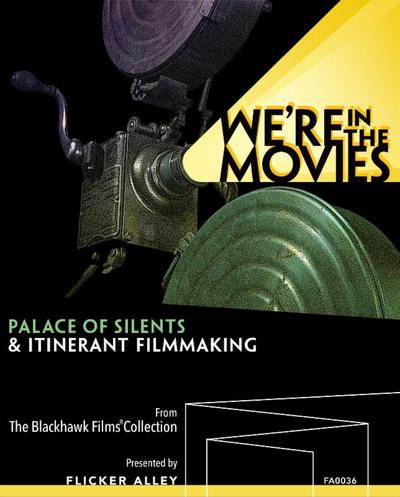 Flicker Alley, in partnership with Blackhawk Films® and Cardoza Pictures, are pleased to announce the release of a new Blu-ray/DVD collection that celebrates the passion of do-it-yourself cinema: We're in the Movies: Palace of Silents & Itinerant Filmmaking. This unique set features two documentaries never before seen on home video, When You Wore a Tulip and I Wore a Big Red Rose and Palace of Silents, as well as five bonus films from early itinerant and local filmmakers. The collection is now available for pre-order on the Flicker Alley website.

Palace of Silents: The Silent Movie Theatre in Los Angeles (2010)
On Fairfax Avenue in Los Angeles there is a 150-seat movie theater that for over sixty-eight years has doggedly dedicated itself to the exhibition of silent films. Built in 1942 by maverick film preservationist and collector John Hampton, the theater championed silent film at the very moment when the Hollywood studios across town were busily destroying their nitrate inventories. With hard chairs, phonograph-record accompaniments, and mostly original vintage prints, the dingy mom-and-pop operation was nonetheless a palace to the fanatical few who became its loyal audience. Through the theater's tumultuous years of operation, its owners and employees have struggled to keep a cherished art form alive, often paying a heavy price in the personal tragedies that have stemmed from this struggle: obscurity, financial ruin, and even murder.

Through interviews, archival footage and detailed research, Palace of Silents reveals the touching, twisted, and bloody history of one independent theater's successful attempt to stubbornly buck every cinematic trend in the hometown of American cinema.

In the early 1980s, documentary filmmaker Stephen Schaller was instrumental in the rediscovery and restoration of The Lumberjack (1914), the oldest surviving film made in Wisconsin, and produced by a group of itinerant filmmakers who traveled from town to town making "local talent" pictures. Schaller's lovely and sometimes deeply emotional, 63-minute journal/essay film offers a look at the making of the Wausau, Wisconsin classic, including interviews with the one surviving cast member and the relatives of others who appeared in the movie. His investigation includes moving remembrances of the people and town of Wausau as it was, and even reveals the on-set accidental death of one of The Lumberjack's top cameramen. More than just a piece of local history, When You Wore a Tulip is also of interest to anyone who cares about film history and preservation. Discovering Schaller's gentle, artful movie is just as exciting as finding a lost family album.

Bonus materials for We're in the Movies include an original essay by film historian David Shepard. Additionally, this Blu-ray/DVD combo set features five early examples of the cinematic tradition of itinerant filmmaking. The Lumberjack (1914) is the oldest film shot in Wisconsin that still exists in its original, complete form. Produced by an itinerant film company out of Omaha, Nebraska and cast with Wausau, Wisconsin locals, the short, silent one-reeler tells a romantic story set against the backdrop of the city's lumber mills. Our Southern Mountaineers (1918), In the Moonshine Country (1918), and Mountain Life are a trio of shorts that document the lives of some inhabitants living in the eastern mountains of Tennessee and in the 'moonshine country' of northern Georgia and Kentucky. Also included are Huntingdon's Hero (1934), a local talent film made in Huntingdon, Pennsylvania, and a newly-restored, 2012 selection for the National Film Registry, Melton Barker's The Kidnappers Foil (1937), which features a local troupe of children from Corsicana, Texas enacting Barker's basic story of child abduction and escape.

All are sourced from original nitrate or preserved 35mm stock, and feature the versatile musical accompaniment of The Ragtime Skedaddlers. The local talent films are presented by courtesy of the Wisconsin Center for Theatre and Film Research, the Academy Film Archive, and the Tennessee Archive of Moving Images and Sound.