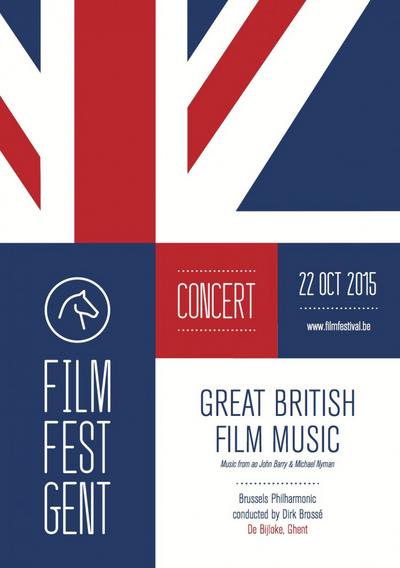 After its successful focus on France last year, Film Fest Gent is to include a British focus as part of its next edition. Following this focus, Film Fest Gent will also celebrate the rich tradition of British film music by organising the concert GREAT BRITISH FILM MUSIC at Music Centre the Bijloke, that will provide an anthology of the work of both classical and contemporary film composers, whom have made a remarkable contribution to the image and success of British cinema.

Virtually every significant name in British film music will be highlighted, from William Walton to John Barry, George Fenton and Michael Nyman. Their celebrated scores will be accompanied by excerpts from celebrated British films, including Richard III, Henry V, Shakespeare in Love, Far from the Madding Crowd, Murder on the Orient Express, Dangerous Liaisons, Battle of Britain, The Ipcress File and The Knack.

As for the film programme, the British films will be programmed in a separate section with twelve to fifteen new films that are true examples of films that show the dynamic and diversity of current British cinema, which in recent years is really flourishing. Other British films will also be programmed in the usual festival sections such as the Competition, Galas & Specials, Classics and Out of the Box. Numerous filmmakers from the UK are set to attend the festival and present their latest work. Q&A's and director's talks will be held during the festival.

The annual film music seminar will also shine a light on British Cinema. Composers Stephen Warbeck, Patrick Doyle and George Fenton (regular composer of Ken Loach) have already committed to participate. Other names of directors and composers will be confirmed in the coming months.

The 42nd Film Fest Gent will run from 13 until 24 October 2015 in Ghent, Belgium. The full programme will be announced on 24 September 2015. The Great British Film Music concert will be held on 22 October 2015 at Music Centre the Bijloke in Ghent. Music will be performed by Brussels Philharmonic and conducted by Dirk Brossé. Tickets are available at Ticketmatic.