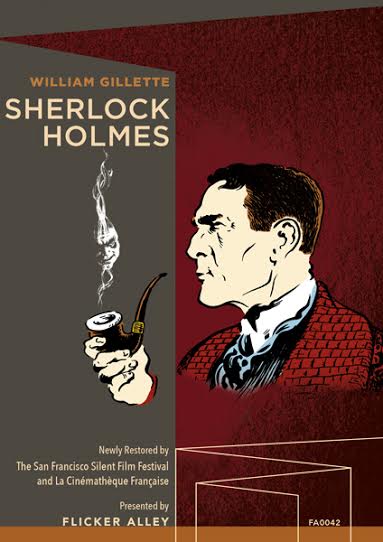 In commemoration of the 99th anniversary of the film's original release, Flicker Alley-along with the San Francisco Silent Film Festival and la Cinémathèque française-is proud to present the Blu-ray/DVD premiere of one of the holy grails of lost films: William Gillette's Sherlock Holmes.

Long considered lost until a complete dupe negative was identified in the vaults of la Cinémathèque française last year, this William Gillette film is a vital missing link in the history of Sherlock Holmes on screen. By the time it was produced at Essanay Studios in 1916, Gillette had been established as the world's foremost interpreter of Holmes on stage-having played him approximately 1300 times since his 1899 debut. This newly-restored edition, thanks to the monumental efforts of both the San Francisco Silent Film Festival and la Cinémathèque française, represents the sole surviving appearance of Gillette's Holmes on film. Presented with optional French and English intertitles and an original score composed and performed by Neil Brand, Guenter Buchwald, and Frank Bockius, Flicker Alley is honored to bring Sherlock Holmes onto Blu-ray and DVD for the first time ever.

The film faithfully retains the play's famous set pieces-Holmes's encounter with Professor Moriarty, his daring escape from the Stepney Gas Chamber, and the tour-de-force deductions. It also illustrates how Gillette, who wrote the adaptation himself, wove bits from Conan Doyle's stories ranging from "A Scandal in Bohemia" to "The Final Problem," into an original, innovative mystery play.

Film restorer Robert Byrne says, "It's an amazing privilege to work with these reels that have been lost for generations. William Gillette's Sherlock Holmes has ranked among the holy grails of lost film and my first glimpse of the footage confirms Gillette's magnetism. Audiences are going to be blown away when they see the original Sherlock Holmes on screen for the first time."

Sherlock Holmes Baffled (1900): Courtesy of the Library of Congress and presented in HD, this is the earliest known film to feature the character of Sherlock Holmes.

A Canine Sherlock (1912): From the EYE Film Institute, the film stars Spot the Dog as the titular character.

Più forte che Sherlock Holmes (1913): Also from the EYE Film Institute, this entertaining Italian trick-film owes as much to Méliès as it does Doyle.

HD transfers from the Fox Movietone Collection: Interview with Arthur Conan Doyle and outtakes from a 1930 broadcast with William Gillette showing off his amateur railroad (University of South Carolina).

A PDF manuscript of the 1899 Sherlock Holmes play by William Gillette.

A PDF of the original contract between William Gillette and the Essanay Film Manufacturing Company.

A booklet featuring images from the film and information about the restoration project.