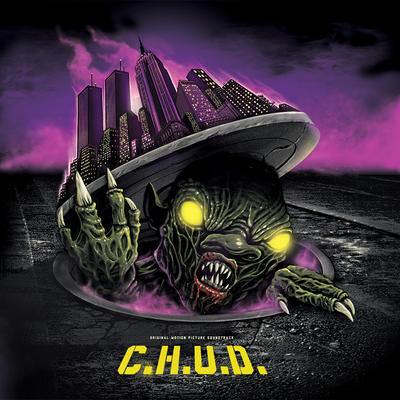 Waxwork Records is proud to present C.H.U.D. The Original Motion Picture Soundtrack. Never before released in any format, Waxwork has tracked down the original master tapes with the effort’s of C.H.U.D.’s composers Martin Cooper and David Hughes.

Released in 1984, C.H.U.D. has gained a devoted cult following amongst B-Movie Horror fans and the film is widely referenced in pop culture to this day via The Simpsons, Archer and more. C.H.U.D. has also served as a launching pad for numerous actors such as John Goodman (Roseanne, The Big Lebowski, Raising Arizona), Daniel Stern (Home Alone), and John Heard (Home Alone).

The primitive synth score composed by Martin Cooper and David Hughes captures the seedy, grim landscape that embodied early 1980’s NYC. In collaboration with the composers, Waxwork has effectively re-stored, re-mixed, and mastered the full film score directly from the original master tapes.

Included in the LP package are composer liner notes and an extended interview with C.H.U.D. director, Douglas Cheek courtesy of Rue Morgue Magazine.