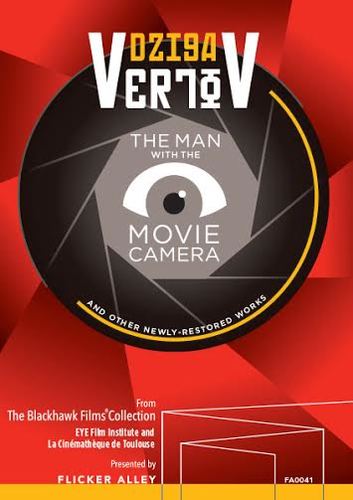 Dziga Vertov: The Man with the Movie Camera and Other Newly-Restored Works | Four Soviet Masterpieces Coming to Blu-ray

DZIGA VERTOV: THE MAN WITH THE MOVIE CAMERA AND OTHER NEWLY-RESTORED WORKS

Flicker Alley, in association with Lobster Films, the Blackhawk Films® Collection, the Cinémathèque de Toulouse, and EYE Film Institute, brings the extraordinary collection of Dziga Vertov: The Man with the Movie Camera and Other Newly-Restored Works to Blu-ray in its North

(Los Angeles, CA - April 16, 2015) - Flicker Alley, Lobster Films, and the Blackhawk Films® Collection are proud to present pristine restorations of four cinematic masterpieces from one of the pioneers of Soviet film.

Dziga Vertov: The Man with the Movie Camera

and Other Newly-Restored Works

Dziga Vertov: The Man with the Movie Camera and Other Newly-Restored Works / 1924-34 / Directed by Dziga Vertov / 279 minutes / U.S.S.R. / Produced by VUFKU, Goskino, Ukrainfilm, and Mezhrabpom

"I am an eye. A mechanical eye. I am the machine that reveals the world to you as only the machine can see it." - Dziga Vertov ("Kino-Eye")

These words, written in 1923 (only a year after Robert Flaherty's Nanook of the North was released) reflect the Soviet pioneer's developing approach to cinema as an art form that shuns traditional or Western narrative in favor of images from real life. They lay the foundation for what would become the crux of Vertov's revolutionary, anti-bourgeois aesthetic wherein the camera is an extension of the human eye, capturing "the chaos of visual phenomena filling the universe." Over the next decade-and-a-half, Vertov would devote his life to the construction and organization of these raw images, his apotheosis being the landmark 1929 film The Man with the Movie Camera. In it, he comes closest to realizing his theory of 'Kino-Eye,' creating a new, more ambitious and more significant picture than what the eye initially perceives.

Now - thanks to the extraordinary restoration efforts of Lobster Films, Blackhawk Films® Collection, EYE Film Institute, Cinémathèque de Toulouse, and the Centre National de la Cinématographie - Flicker Alley is able to present the four films featured on Dziga Vertov: The Man with the Movie Camera and Other Newly-Restored Works in a brand-new, Blu-ray edition.

The Man with the Movie Camera (1929) - Named the best documentary film of all time by Sight and Sound, it is presented here in its entirety for the first time since its original premiere. Discovered and restored at EYE Film Institute in Amsterdam - with extensive digital treatment by Lobster Films - the 35mm print from which this edition is, in part, sourced is the only known complete version of the film.

Kino Eye/The Life Unexpected (1924) - A cinematographic poem in which Vertov lays the foundation of his Kino-Eye principles, the film shows the incredible force of his theories, but also the beauty and energy of a society fresh from revolution, ready to face the challenges of a difficult future.

Enthusiasm - The Symphony of the Donbass (1931) - One of the first Soviet sound films, it deals with the Five Year Plan of the late 1920s, and represents Vertov's radical attempt to link economic progress with the introduction of sound in cinema.

Three Songs About Lenin (1934) - Arguably Vertov's most personal work, the triptych celebrates the Soviet leader 10 years after his death as seen through the eyes of the people.

The Man with the Movie Camera and Kino Eye feature musical accompaniments by Alloy Orchestra and Robert Israel respectively, while original soundtracks have been restored for Enthusiasm and Three Songs About Lenin. Bonus features include Kino Pravda #21, a newsreel made in 1925 to mark the first anniversary of Lenin's death, as well as a booklet featuring information about Vertov's life and works.