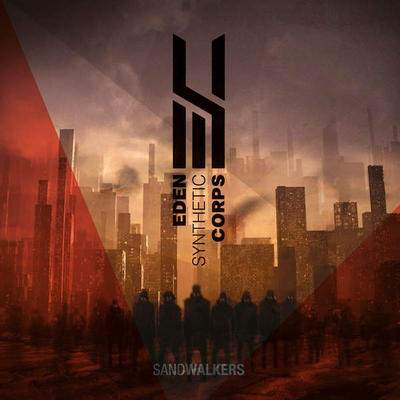 Eden Synthetic Corps were formed in 2005. Their early songs started getting rave reviews all over the internet and they signed a record deal with Dark Dimensions / Scanner just a couple of months after their formation.

Their debut album Matte (released in 2006) was enthusiastically received all over the Alternative community and the word was all over that there was a finally an Electro-Industrial band from Portugal worth listening. ESC always tried their best to sound unique among hundreds of clones and they achieved a new level of identity when they released Enhancer.

Enhancer is a concept album that tells the story of a serial killer on a women killing spree. The artwork was widely considered as one of the best among all the bands in the same musical universe and the album followed the path of Matte by getting great reviews from the press and great feedback from listeners. Along with Enhancer came ESC's first international shows and another presence in the DAC (Deutsche Alternative Charts) top ten albums.

Their third album, featuring yet another concept, portrayed as comics, on the artwork of a luxurious digipack packaging. "Eight Thousand Square Feet" brought us one of ESC's most intense album to date, featuring guests such as Carsten Jacek from [:SITD:] and Jan L. from X-Fusion. This ESC album stayed on the DAC charts for eight consecutive weeks. They played lots of shows after the release of this album, including countries like Russia, Ukraine and even the prestigious Wave Gotik Treffen in Germany.

2013 brought us us ESC's fourth offering named Breathing Salt, with lots of new refreshing elements to the songs that glued the avid electro-industrial music listener to his speakers from the first to the last song. Once again, this album was featured in the DAC (Deutsche Alternative Charts) top ten albums.  Continuously shaping their sound, ESC's fifth album will be released soon, featuring yet again lots of new elements like a broader range of vocals, joining trademark ESC beats with innovative melodies.  Darker than ever and this time focused mainly on old civilizations, mythology and nomadic people, the new album, titled "Sandwalkers", is a breath of fresh air in the Electro-Industrial Scene.

07
03 Electronic Act IMBUED VAGARY Releases 6 CD Project – “Hexalogy”
07
03 33 years ago the Drag Queen of the 20th Century, Divine, passed away!
07
03 41 years ago Siouxsie and the Banshees released the single 'Happy House'!
05
03 44 years ago Kraftwerk released Trans Europe Express!
04
03 Electro/Industrial Artist I YA TOYAH Unleashes New Single & Video, 'Out Of Order'
04
03 Firestarter | Celebrating The Sound Of The Prodigy And The Impact Of Keith Flint who past away 2 years ago.