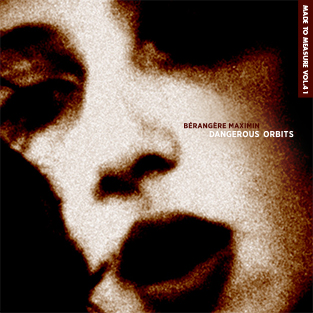 New in Made To Measure: Bérangère Maximin

Bérangère Maximin makes spacious colorful music. A sonic sculptress of exception, she started out in an academic environment with an electroacoustic training, and has gradually incorporated the contribution of post-punk, dub and sound art experiments to develop a hyper-personal style, producing sensual, hypnotic, sultry pieces with immediate impact. BM moved from her native Reunion Island to France when she was fifteen, and studied with the musique concrète composer Denis Dufour (a member of the famous GRM and a pupil of Pierre Schaeffer). Her first album came out on John Zorn’s label Tzadik.

Bérangère naturally drew inspiration from composers such as François Bayle, Luc Ferrari, Eliane Radigue and has also listened to a lot of early electronica and glitch music. She went on to develop her own approach, both to studio recording and to live performance, taking in the experiences gathered in the course of her collaborations with the likes of Fennesz, Rhys Chatham, Richard Pinhas and Fred Frith (with whom she played several duet concerts).

Dangerous Orbits is Bérangère Maximin’s fourth album, and her first for Crammed Discs’ Made To Measure series.

Bérangère Maximin’s music engages the listener in considerations of space and textures. Her new album, Dangerous Orbits takes us in a constant sway between lightness and drama. Curving filigree voices, odd melodies, powerful sub-bass, spacious drones, oceanic vibrations and orchestral bursts flow with evident motricity into a world which is together multidimensional, effusive and raw.

A master manipulator of space and distance… that sounds like Maximin sucking the listener’s brain up through a straw. - Rock-A-Rolla.

Raised on the native land of her mother, a French overseas territory in the Indian Ocean with an active volcano surrounded by wild beaches, Bérangère Maximin moved from Reunion Island to the Metropolis when she was just fifteen. From that time, she’s kept a very special relationship with her environment which shows in prismatic plating of sounds she interperses with melodic rashes, her playing with laptops and midi controllers delivering what she likes to call her digital chimeras.

The electroacoustic composer has produced a very personal repertoire marked by encounters that have inspired her writing in various degrees. She studied under the musique concrète composer Denis Dufour and then came to the attention of John Zorn who released Tant Que Les Heures Passent on his label (2008). In the meantime she crossed paths with the Ukrainian artist Anton Yakutovych who contributed with conceiving her album sleeves and an evolutive series of portraits until his death last year. Taking inspiration from the New York improv scene and her European tour in solo and in duo with the likes of Fred Frith, Fennesz or Rhys Chatham, her work then developed towards live practice which then led her to compose No One Is An Island, the second and only collaborative album so far, a very different output to her debut and the confirmation of the respect Bérangère had started to get from established artists.

Bérangère Maximin’s personality gives her a foundation for taking laptop music somewhere different, a meticulous producer with great resource and tenacity. The listener could get lost in minimalist backdrop and prominent bass, which I find really close to the spirit of the likes of King Tubby - The Quietus.

The minimal series Infinitesimal (2013) describes a slow transformation, a deep introspection far removed from the convention of the genre. She seems to be feeding her feelings directly into morphological sounds, suffocating bed of sighs, dub effects, metallic scrapings, very special imaginary areas where only matters the physicality of the moment.

Slowly, Infinitesimal establishes internal logic, matching the way things make sense in your head even if you can’t explain them. - Pitchfork.

Working on this new project seemed to have opened a door, a new trajectory leading to even more unfamiliar and wider spaces. She carried on recording straight away, which was fueled by some inner necessity, ending with five pieces that keep this particular warm and organic feel with an obvious sense of detail and maturity, a place to really get lost in.