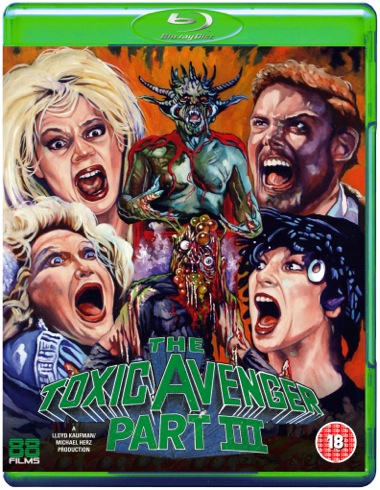 The Toxic Avenger is back in action with 88 Films

Lloyd Kaufman’s Troma Films established its first ever home-grown film franchise with 1984’s carnage-ridden classic THE TOXIC AVENGER (1984). Gleefully gruesome and proudly featuring a frothy mix of bad taste comedy, bare breasts and brutalising set pieces, THE TOXIC AVENGER story would continue in 1989 with the green gargantuan’s first follow-up adventure. A theatrical and VHS success, THE TOXIC AVENGER II concluded with the promise of further sanguine-splashed fun – and series creator Lloyd Kaufman proved to be a man of his word. As such, just one year later, the eco-friendly crime-fighter made a celluloid comeback - this time with THE TOXIC AVENGER III: THE LAST TEMPTATION OF TOXIE.

Resuming with the more cartoonish tone of part two, this third installment of the Troma totem has Toxie unwittingly forced into a deal with the Devil himself! And it is all because he wants to restore the sight of his beautiful blind girlfriend, Claire (played by the divine Phoebe Legre). But will the only lady in his life opt to find someone else after discovering her lover’s real monstrous visage? Or will true love finally win out?

The suspense is killing the people of Tromaville...

And so is Apocalypse Inc. - Toxie’s number one enemy and the cash-grabbing gang of ghouls who have his hometown in their grip! With plenty of cranium-crushing action, and a sizzling satirical streak, THE TOXIC AVENGER III takes this acclaimed creature feature franchise to new heights of bombastic brilliance. Prepare to be radiated by the raucous charms of THE TOXIC AVENGER III - fully restored and re-mastered by 88 Films for BluRay and available to buy from January 26th, 2015!

But that is not all because 88 Films is also proud to offer Troma-fanatics the British bow of CITIZEN TOXIE: THE TOXIC AVENGER IV…

Originally released in 2000, this ten-years-in-the-making Troma millennium masterpiece is jam-packed with skull-smashing silliness and over-the-top crimson-caked superhero skirmishes. Returning to the sexy thrills, and splatter film theatrics, of the timeless censor-baiting original, this fourth outing is esoteric, idiosyncratic and positively insane! Take it from us: only the great Lloyd Kaufman could dream up a movie as demented as this - with Toxie put into a blood-spilling battle against his devilish doppelganger The Noxious Avenger. Featuring cameo appearances from director Eli Roth (HOSTEL), Motörhead singer Lemmy, adult movie legend Ron Jeremy and Scream Queen sex symbols Debbie Rochon, Tiffany Shepis and Julie Strain, CITIZEN TOXIE: THE TOXIC AVENGER IV might just be Troma’s finest achievement to date! Never before released in the UK, this superb franchise sickie obtains a stunning BluRay debut from 88 Films on January 26th, 2015.

THE TOXIC AVENGER III: THE LAST TEMPTATION OF TOXIE SPECS:

·Where in the World is Toxie?

·Naked Dance of the Damned Fat

·The Stars of Toxie 3 on the set of Citizen Toxie