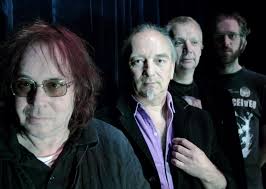 New album out by The Legendary Pink Dots

The Legendary Pink Dots are delighted to announce the forthcoming release of their new album Pages Of Aquarius on Metropolis Records.

They promised us so much...

Naked hippies and soma fountains and patchouli rain from candy floss clouds and flowers and the summer that would never end. The Age of Aquarius.

The Age of Harmony and understanding and tolerance. Say it softly, like an Aquarian, The Age of....Love. The Age of Love and HAIR.

Page One Aquarius. How does it look out there?

Bad hair, no hair. Covered up. Walls. And God is everywhere, splashed in red across those walls, And the fountains are dry, the ocean is full and they're dragging the lost from the depths of the sea and tying them up with wire.

I'm an Aquarian. I believe in this crazy stuff and I visualise big old Pisces lying there, dying there. Huge, wounded, angry because no-one helps and every hot feverish cry brings a new storm, and every kick shakes the planet to it's core. Big old Pisces. Huge but invisible so no-one sees him except the irritating baby that tickles his nose with an oily feather.

The World is Beautiful. Blessed be. - EK

The Legendary Pink Dots are an Anglo-Dutch experimental rock band formed in London in 1980. Although far outside the mainstream, LPDs have released more than 40 albums, have a devoted worldwide following, and tour frequently. Distinctive vocals and lyrical imagery blended with hypnotic guitar and synth washes and spellbinding bass pulses to create an enthralling, captivating release.