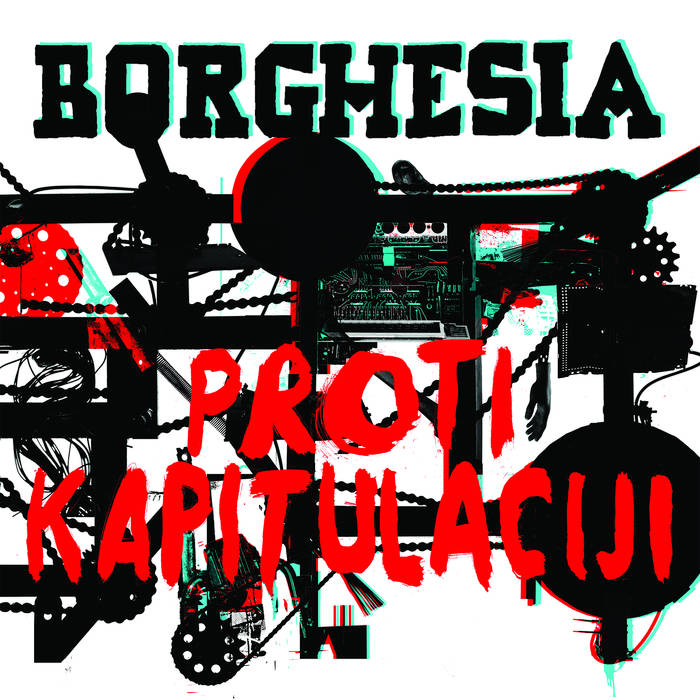 New album by BORGHESIA - Proti kapitulaciji (Against Capitulation) - Out now!

Slovenian electronic music pioneers and video art trailblazers Borghesia return with the new full-length album ‘Proti Kapitulaciji’ (‘Against Capitulation’) based on the timeless Pan-European poetry of Slovenian visionary Srečko Kosovel (1904-1926). During the eighties, the duo formed by AldoIvančič and Dario Seraval contributed to the blossoming of the European electronic body musicscene. Their releases for the cult indie label PIAS are considered as one of the heights of dark electronic sounds of the period. The band went on a hiatus just before the new millennium. A new Borghesia was formed and its membership expanded in 2009. Their comeback album ‘And Man Created God’(Metropolis Records, 2014) opted for a more orchestrated sound that crossed genre boundaries. A similar mindset governed the creation of the new LP.

‘Proti Kapitulaciji’ fuses erratic new wave and haunting industrial sounds with their trademark morbidly sexy ambience. The main novelty is a newfound soft spot for bowiesque arrangements. As the free-floating opener “Odprite muzeje” sets the pace, the air is permeated with fear of unrestrained nationalism. While primordial and rough, songs like “Kons” and “Moj črni tintnik” boast with their signature libidinal grooves. On tracks like “Destrukcije” or “Evropa umira”, the band’s experimental tendencies break loose, culminating in cinematic synth-driven soundtracks for the dying Europe. There is also the club-ready “Jaz protestiram”, an off-kilter industrial stomper worthy of Helena Hauff’s DJ set. The drowsy, hypnotic and chilling tones from singers Dario Seraval, Irena Tomažin Zagoričnik, Jelena Rusjan and Ivo Poderžaj provide the perfect foil for the groovy and paranoid instrumentals by guitarists Andraž Mazi and Sašo Benko. This multi-layered sonic collage of rhythm machines, samples, field and instrumental recordings, Stravinsky, volksmusik, cut-up sonic fragments and vocals, inspired by Luigi Russolo’s The Art of Noises (1913), was attentively crystalized and put together by Aldo Ivančič.

The album revolves around the striking poetic language of Srečko Kosovel. During his short but fruitful life as an adherent of unrestricted technological change, “the Nikola Tesla of modernist poetry” grew into an ardent critic of European politics. Years before Burroughs and Bowie, he invented the cut-up technique and wrote a poem called “Heroes”. His verbal explosives calling against sterile politics and petit bourgeois provinciality are now resurrected by Borghesia.

The album was recorded, produced, mixed and mastered by Aldo Ivančič. The cover comes from the talented artist Matej Stupica. Live visuals are provided by Boštjan Čadež and Lina Rica. “Proti kapitulaciji” will be released on October 23rd, 2018 on Moonlee Records in digital, CD and double 12” formats.

While in 2018 young producers opt for a rehash of the original EBM / industrial tropes, Borghesia aim for fresh explorations in sound. The result is an uncanny sonic examination of the European heart. It sounds murky and psychedelic, evoking a macabre feeling of emergency – as any urgent call against capitulation does. Borghesia loudly declares: It’s high time we put Europe on the shrink’s couch!

Borghesia will present their new album on two promotional concerts brought to you by Moonlee Records, Layerjeva hiša and Dvocikel: