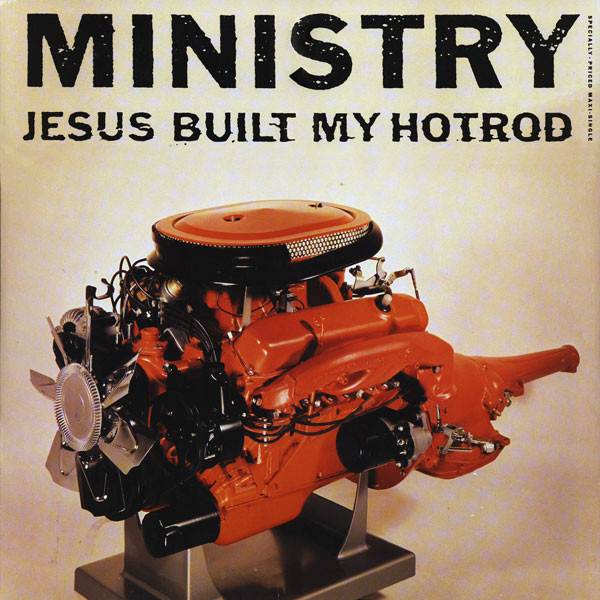 Jesus Built My Hotrod was released on November 7th 1991 as the first single from their fifth studio album Psalm 69: The Way to Succeed and the Way to Suck Eggs. It was written by the band's frontman Al Jourgensen, bassist Paul Barker, drummer Bill Rieflin, session keyboardist Michael Balch, and the Butthole Surfers lead singer Gibby Haynes, and was co-produced by Jourgensen and Barker. The industrial metal track features elements of rockabilly and psychobilly, and is influenced by the Trashmen 1963 hit "Surfing' Bird", and Flannery O'Connor novel Wise Blood; the song’s instrumentation is defined by its polyrhythmic structure.

The single reached No. 19 in the Billboard Modern Rock Tracks chart with approximately 128,000 copies sold as of mid-July 1992, preceding the later success of Psalm 69.

Soon I discovered that this rock thing was true
Jerry Lee Lewis was the devil
Jesus was an architect previous to his career as a prophet
All of a sudden, I found myself in love with the world
So there was only one thing that I could do
Was ding a ding dang my dang a long ling long
Ding dang a dong bong bing bong
Ticky ticky thought of a gun
Every time I try to do it all now baby
Am I on the run
Why why why why why baby
If it's so evil then?
Give me my time, with all my power
Give it to me all again (wow)

Sicky sicky from within
Every time I stick my finger on in ya
You're a wild wild little town bitch
Now how 'bout ding a dang dong dong dong ling long
Dingy a dingy dong a down
Every time you tell me baby
When I settle down
Got to get me a trailer park
And hold my world around
Why why why why?

Why why why, why why darling
Do you do you tell me to play?
Half the time I talk about it all now baby
You know what I'm talkin' about I said
Why why why it'll
Ticky ticky ticky ticky son of a gun
Ding ding dong a bong bong bing bong
Ticky ticky thought of a gun

Alone and it's here it's this thunder
The thunder oh thunder
Oh!
Jesus built my car
It's a love affair
Mainly Jesus and my hot rod
Yeah, fuck it!