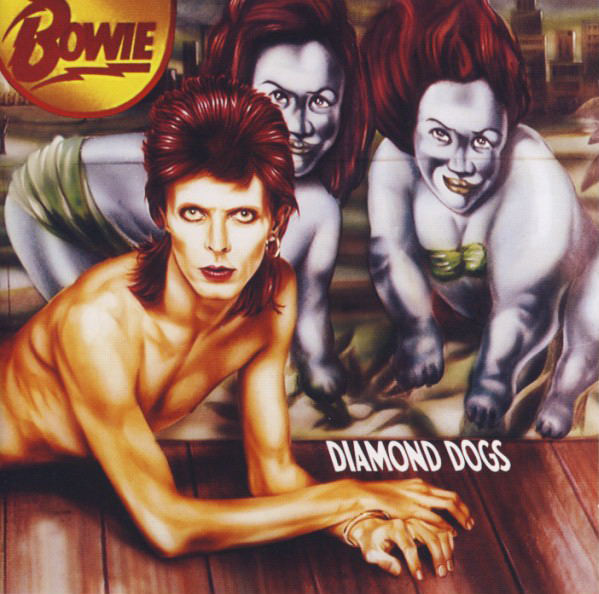 "I don't know where I'm going from here, but I promise it won't be boring." —​David Bowie

The talent that lay behind the monochrome eyes of David Bowie was not just his obvious gift for creating memorable songs, it was in fact his unique view of life and existence that separated him from us. Sometimes he did not always hit the intended mark, however when he did he rose above not only decipherable genres of music but art itself. This factor is omnipresent in his 1974, flamboyant and deadly Diamond Dogs.

This post-apocalyptic nightmare, was Bowie’s breakaway album from the Spiders from Mars. It was essential that the Spiders imploded for Bowie to push forward into new areas, this was his cut and run from glam rock and his Ziggy Stardust foil, guitarist Mick Ronson. Though the album itself is a drastically different approach which had capitulated Bowie's previous work, his earlier characters of Aladdin Sane and Ziggy, though dead, still made their spectral prescience felt on moments of the album. The front cover picture of Bowie with his Ziggy-like haircut was one give away, the sci-fi subject still at the fore another, but the style had shifted dramatically as did the delivery.

Diamond Dogs is a fur covered Clockwork Orange style rampage through an abysmal futurescape of drugs, murder and sex. It drips with a steel tongued punk attitude, a proto-ambient dash of the new wave to come. The reuniting with Tony Visconti as producer was another plus in helping the albums rock conception and complicated structure, getting it to number one in the UK and the amassed critical praise that followed the album then and now.

From the unearthly opening-‘Future Legends' heralds the album as it launches with a terrifying howl. An ambient and ominous music flows in the background, Bowie's vocal in and out of phase as he talks you through the new Manhattan, now renamed Hunger City. With a macabre nursery rhyme of children's voices, monstrous sounds and finally crowd kicks in and a recording of a live audience screaming and Bowies shiver down spine opening line-"This Ain't Rock and Roll, This Is Genocide!". Into the title track and the introduction of a new character-"Halloween Jack". With a Stones/Stooges sounding guitar, simple in its approach which makes it all the more enjoyable and relatable. "Diamond Dogs" does feature some of David Bowie's most remarkable songs, such at the infectious 'Rebel Rebel' containing his own memorable guitar lick.

Then there is the punk avant garde of ‘Sweet Thing’ and its midway segue-'Candidate' an act of brilliance in both style and lyrics. Remaining q fan favourite even today,the lyrics sang in a seedy swagger.The bisexual question compounded even more so here-"If you want it, boys, get it here thing 'Cause hope, boys, is a cheap thing, cheap thing"

The middle section ‘Candidate’ features a strong example of Bowie’s attempts at a William S.Burroughs style cut and shut lyrics. Resulting in taking random lines and phrases and putting them into some order that makes sense, here to devastating effect as a distorted guitar leads the concerto;"I'm having so much fun with the poisonous people, Spreading rumors and lies and stories they made up, Some make you sing and some make you scream!” The original conception of Diamond Dogs was designed to be a rock opera based on the George Orwell novel '1984'. Some of the obvious elements of which still exist on the latter half of the album in the songs 'Big Brother' and of course '1984'. The refusal by the widow of George Orwell-Sonia, to let the project take fruition does not in any way detract from the greatness of the album. Suffering in a way from the similar faith of The Who and Pete Townshend's breakdown triggering 'Lifehouse', a 48 track quadruple album, aborted for the more slimline and rock friendly 'Who's Next'. Bowie, in this case took it on the chin and thankfully continued to create the album. The coke fueled assault, the music as an art form with a midas touch had came to fruition once again, another classic to add to canon of excellence David Bowie was building. More controversy via the cover this time instead of the subject matter. The album cover released as a gatefold image by Belgian painter Guy Peellaert, the front, Bowie-Ziggy like, resting whilst the back cover revealing that Bowie had the body of a dog, complete with a prominent penis. Some airbrushing rendering Bowie's canine groin smooth and blank. This risqué cover was quickly withdrawn, instantly becoming a collectors item. The tour for the album, the most elaborate so far,a little over a million (nowadays) per set. With a stage itself a replica of 'Hunger City', along with the elaborate stage props. After two months of rehearsals, the tour kicked off in June 1974,running until August while the month was taken off. Bowie worked on his next skin shedding project, his plastic soul era.When the tour resumed the set was scrapped,the tour name changed to 'The Soul Tour', although the 'Diamond Dogs' era was over as quick as it started, the songs remained in his set, the idea and direction of his next project-Young Americans.