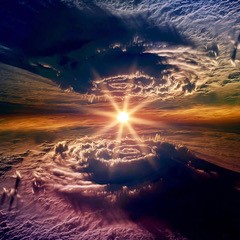 In recent years, French atmospheric rockers Klone have built their name on making music that is as deeply introspective as it is sonically powerful. Le Grand Voyage, the band’s first release for UK post-progressive specialists Kscope on 20th September, is an album brimming with that sense of searching and self-discovery, its 10 tracks living up to its name in unabashed no-stone-unturned existential exploration.

Much of the inspiration for the tracks including “Hidden Passenger” have come from pondering on the great philosophies of life, those eternal unanswered questions like who we are, where we are going and, ultimately, what happens next. This uncertainty and confusion surrounding mortality, the notion that something or nothing awaits us, unleashed the creativity in the French art-rockers.

This path led us here

To be what we are

To each other, now

Life is only a scar

Guillaume Bernard, Klone’s guitarist, gives us a further insight into the album’s inspiration: “Me and Yann, our singer and lyricist, were watching documentaries about near death experiences, and what happens after death? what is the spirit? those kinds of questions. We found it an exciting and a mysterious subject to think about – what really happens? We feel that we create music that is deeply connected to the universe. We used a lot of reverb, almost as if we were to touch everything in space… we want our music to resonate in the cosmos!”

What Klone have created is bold in sonic ambition, twisting dark guitars and electronic ambience into a modern masterpiece that feels excitingly new, yet in many ways feels like a contemporary take on Pink Floyd’s Dark Side Of The Moon.

The first single & opening track from Le Grand Voyage, 'Yonder', bridges the gap between this latest opus and 2015 studio full-length Here Comes The Sun. Mixed by Francis Castes at the Sainte Marthe studio in Paris, Guillaume describes the music as a “natural and logical continuation of the song The Last Experience which concluded our previous album.” Watch Klone performing “Yonder” live at this summer’s Hellfest HERE.

Having racked up a lot of interest on home soil after previous albums Here Comes The Sun and Unplugged, Klone are now looking to focus on and extend their international operations. They’ve performed in the UK with cult grunge heroes King’s X and French metal titans Gojira, toured with Devin Townsend and landed supports for Helmet, Orphaned Land and Anneke Van Giersbergen.

The band has confirmed they will be supporting the release of Le Grand Voyage with an extensive live campaign. They began with this year’s Hellfest & Into The Grave Festivals and will soon be embarking on their headline shows.