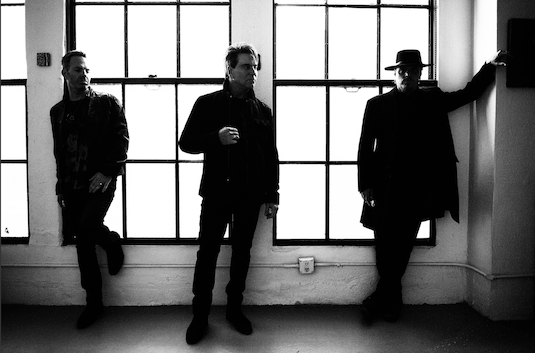 ASHRR’S Dark Industrialized New Single, “ALL YOURS ALL MINE (DARKER DAYS MIX)” Is Streaming Now

Los Angeles’ darkwave trio has returned following a groundbreaking 2019 with a brand new, reworked single titled “All Yours All Mine (Darker Days Mix)” that is now available on all streaming services. In a continuous process of inspired creativity, the band has no plans to slow down this year with additional new music forthcoming.

Commenting on the track vocalist Steven Davis says: “The song deals with confrontation of self and social anxiety. We have no better foil than ourselves. The video is about wrestling with yourself or different versions of how you perceive yourself.”

In 2019, ASHRR released their debut full-length album, Oscillator, which spun off several riveting singles (heard at the links below) that are familiar, recalling new-wave/synth driven rock style, and yet entirely unique with a signature blend of skilled and mesmerizing songwriting with brooding and dark mysterious undertones.

A series of serendipitous events united the triumvirate in late 2017. They consistently rallied to conjure up music for ASHRR throughout 2018. In between regular live appearances and the self-titled ASHRR EP, the vision unfurled on the 2019 independent full-length debut, Oscillator. NPR touted the music video for “Don’t Wait Too Long” on its coveted “All Songs Considered” as acclaim came from POPDUST, AXS, LA Weekly, buzzbands.LA, airplay on KROQ , and many others. Maintaining a prolific pace, the Live in L.A. EP and single “Sacrifice” followed. A remix of “All Yours All Mine” closed out the year and heralded more to come in 2020 and beyond.