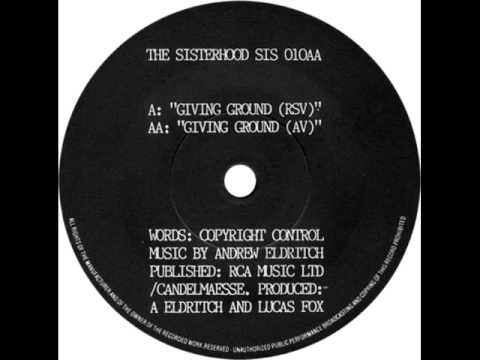 The first single by The Sisterhood, “Giving Ground,” was released on 20 January 1986, on Andrew Eldritch’s Merciful Release label, which was distributed by WEA. The details of this release are dramatic in the extreme, producing enough lasting angst and antagonism to fuel every goth club on the continent for a decade.

The success of the first album, First and Last and Always, released 11 March 1985, had catapulted The Sisters of Mercy out of Leeds to stardom. Success demanded its pound of flesh, however, resulting in increased strain on the band. Over the summer, founding guitarist Gary Marx left mid-tour, citing “personal reasons.” The band finished the tour and took a short break, then reconvened to write and rehearse for the next album that fall. Bassist Craig Adams walked out, ostensibly over the bassline for “Torch.” Guitarist Wayne Hussey left the next day. Accounts differ regarding the details and reasons for these departures, but Hussey and Adams quickly formed a band, with Red Lorry Yellow Lorry drummer Mick Brown, that would eventually become The Mission. WEA dangled a £25,000 advance, originally promised to the Sisters, to whichever group made an album first.

The Sisters had been disintegrating for some time before these departures, and the new uncertainty about the contractual advance raised the stakes yet again with regard to the future of both bands. Before the final London show of the original lineup, later released as Wake, Eldritch had given interviews about plans to form a supergroup with Patricia Morrison, ex-Gun Club, and Allen Vega from Suicide. In their frustration with Eldritch, Hussey and Adams decided to call their new group The Sisterhood, which was not coincidentally the name of the Sisters’ fan club. They booked a London debut for 20 January 1986. Eldritch threatened legal action over the name, but these threats came to nothing. He decided to beat his former bandmates to the punch. A single, “Giving Ground,” was released by a different Sisterhood on the same day that the Adams-Hussey band had scheduled their first gig.

This Sisterhood was eventually composed of Eldritch, Morrison, Vega, James Ray, and Lucas Fox. Fox, who played drums for the original Motörhead lineup (when the band was named Bastards), helped with production, and Morrison played bass, as she later would on the Sisters’ Floodland (1987). Vega did vocal tracks on the later Sisterhood Gift album. But for the initial single, recorded primarily to block former bandmates from using the name, time was of the essence. Due to contractual obligations, Eldritch could not sing on the new single, so he enlisted James Ray to do the vocals. The single was recorded in five days. It included two mixes of “Giving Ground,” the “RSV” on Side A and the “AV” on Side AA. The cryptic mix names alluded to translations of the Bible in English, the Revised Standard Version and Eldritch’s beloved Authorized (or King James) Version. The RSV was a twentieth century “update” of the 1611 AV translation for readers ill-equipped to comprehend its Elizabethan English. Given Eldritch’s professed admiration of the older version, it may not be a stretch to speculate that he considered the instrumental track the “original” and any version with vocals added a necessary evil.

Musically, the single seemed hastily put together, which in fact it was. Lyrically, however, the song articulates a refusal to compromise with others, and an anticipation of moving onward that, given the circumstances of its composition is difficult not to read as autobiographical. The AV track was instrumental, notable for featuring the drum machine Doktor Avalanche. The insentience of the machine allowed “him” to circumvent the contract with WEA that prevented Eldritch from appearing by name on his own track. The RSV version, which featured Ray’s vocals, shot quickly up the charts on strength of association with the Sisters, but sank quickly as well.

But the release of the single had nevertheless done the business. Hussey and Adams were forced to come up with a new name, and in March 1986 they became The Mission. Eldritch meanwhile recorded the remainder of the Sisterhood album, Gift, which appeared later that year with yet another version of “Giving Ground.” The later full album became noteworthy for its influence on later electronic music. At the time of the single, however, its crucial achievement was ironically enough gaining ground. That £25,000 check won The Sisters of Mercy time to regroup, time to experiment in the studio with early versions of “This Corrosion,” and ultimately time to begin recording their next album, Floodland, a breakthrough in songwriting, production, and global ambition for the band.

I watch
Surrender
Because I know
...
Now I know you will not see
The madness we have seen
And now I know you cannot be
All that your (fright/flight) has been