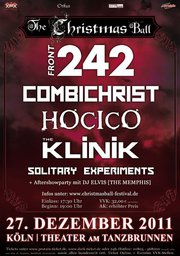 The Christmas Ball takes place in Köln on the Tanzbrunnen site besides the Rhein, the same site as the Amphi festival, but only in one of the venues, the Theater. The Ball's previous edition had taken place in the snow and I had a great time watching Fields Of The Nephilim, Project Pitchfork, Laibach, Agonoize and Faderhead. I was thus eager to get back to Köln to discover the 2011 edition, all the more because two Belgian Bands, The Klinik and Front 242, were in the program, facing international acts like Hocico and Combichrist.

It wasn't even 19:00 when the program started with Solitary Experiments, a German band formed in 1994. They have released more than 10 CD's/EP's, the newest of which being ‘In The Eye Of The Beholder’ (Out Of Line). More information here.

On stage, the band was composed of Dennis Schober (vocals), Michael Thielemann (synths), Steve Graeber (synths) and Frank Glassl (drums). Their music is of a typical synth-pop style, that reminds us of VNV Nation, Assemblage 23, Culture Kultür, Angels And Agony, etc. The music was perfectly in place and the voice strong and clear but there was a lack of originality and variety in the music. As a consequence, the audience was not really enthusiastic about the performance.

Video excerpt of the concert in HD: "Delight"

No need to present The Klinik, the Belgian project formed by Marc Verhaeghen and Dirk Ivens (Absolute Body Control, Dive, Sonar). In the mid 80's, they were pioneers of electro/industrial with touches of trance and dark ambient. I have seen them already at the BIM festival in Antwerp back in 2008 and I was looking forward to see their show again.

The stage line-up of the band consisted of Dirk Ivens and BORG (The Juggernauts/Ex-Vomito Negro) on keyboards, both wrapped in bandages and wearing black coats. The first song was "Cold As Ice" and immediately it was clear that a lot of people had come for The Klinik because the audience became much noisier and started to move and to scream. The sound was huge and gave a powerful and new dimension to the minimalistic arrangements. When the band played "Quiet In The Room" and "Hours and Hours", there was even a pogo in the first rows. After the more recent song "Mindswitch", it was time for two classics: "Obsession" and "Black Leather". The two last songs, "Moving Hands" and "Memories" brought a climax with their technoid sounds and haunting vocals. The crowd shouted to get an encore but it was obviously a principle at this festival not to allow any encore's (with the exception of the headliner).

It means that the set was a bit short for me. I also missed Marc Verhaeghen and his legendary trumpet but as a whole, it was an excellent concert! Dirk Ivens has a very strong presence on stage and live video's by BORG give a real added value to the live experience. This concert was a clear proof that The Klinik were instrumental in the development of electro. In my opinion, they would have deserved to play just before Front 242. It would have allowed them to play other classics like "Go Back", "Sick In Your Mind", etc.

Video excerpt of the concert in HD: "Obsession"

Coming from Mexico, Hocico is one of the spearheads of the harsh electro/aggrotech scene. Formed in 1993, the band consists of two cousins, Erik Garcia a.k.a Erk Aicrag (vocals, lyrics) and Oscar Mayorga a.k.a. Racso Agroyam (synths). To date they have released 10 full-length albums and the last one, "Blood On The Red Square" is a CD/DVD of a concert given in Russia. Check them here.

On stage, the two members of the band were alone and video's were projected on the main screen but also on smaller screens of different sizes and types on the stage. At the center, the usual skull sculpture. After the intro, the show began strongly with "Breathe Me Tonight" and Erk started moving frantically on the stage and screaming with incredible energy. The band played a mix of new and older songs and the audience was in general very receptive. The sound was very loud but well-balanced. The main highlight of the show came at the end with club killers like "Poltergeist" (see video below), "Untold Blasphemies" and "Tiempos De Furia".

Though their music has never been my 'cup of tea', I have always been impressed by Hocico, especially by Erk's energy on stage and by the band's authenticity. When the show was done, the audience screamed for an encore but it was time for the next act.

Video excerpt of the concert in HD: "Poltergeist"

Everybody knows Combichrist, the Norwegian aggrotech band, be it only for their huge club hit: "This Shit Will Fuck You Up". Formed in 2003 by Andy LaPlegua (Icon of Coil, Panzer AG), the band got its breakthrough in 2005 with the album "Everybody Hates You" and was recently pushed under the spotlights by supporting Rammstein in their worldwide tours.

After an American folk song played as intro, the band came on stage, composed of Andy LaPlegua, two drummers, one keyboardist and one guitarist. They all have their face painted with white stripes and their presence is impressive. After the first song, "Shut Up And Swallow", we realized that Combichrist was playing much too loud. People were covering their ears and we really had the impression that the band was playing for a stadium: it was insane. Apart from that, the concert was a long series of Techno Body Music hits with words like "shit", "fuck" and "blood" being eructed in variable orders. My opinion is that Combichrist is becoming a caricature of itself to get some attention from American crowds. Of course, for those who liked the band or just wanted to dance, the show was perfect and a lot of fans "got their body beats"!

Video excerpt of the concert in HD: "Fuckmachine"

What can you say about the most influential Belgian band in the history of EBM, a genre that Front 242 contributed to create in the early 80ies? The band started with "Principles" (1981), "U-Men" and "Geography" (1982), "No Comment" (1984) and got its international fame with "Front By Front" in 1988 and with the hit "Headhunter", which reached #13 on the Billboard Dance/Club Play Songs chart. "Tyranny >For You<" (1991) was their highest charting album and at that time the band was on heavy rotation on MTV's alternative programs. Unfortunately there was a break in their career and it was only in 1997 that the original members got together again for a remix album "Re-Boot: Live '98" and later for a new album, "Pulse". Their last album is a live album, "Moments.." and the band has been playing a lot of concerts and festival in the last few years, much to the delight of fans all over Europe.

The band that went on stage at the Christmas Ball consisted of Jean-Luc DeMeyer (vocals), Richard “23” Jonckheere (vocals), Patrick Codenys (keyboards), Tim Kroker (drums) and Daniel B. (mix). It was Richard who sang the first song as lead vocalist with "Shout It Loud" but Jean-Luc DeMeyer quickly joined him on vocals for "Together" and the subsequent tracks. The sound was perfect and the video's very creative and in full support of the songs. It was obvious that most of the people were there for Front 242. The first highlight of the concert was of course "Headhunter", with the whole audience shouting the chorus with the band. After "Commando Mix", the rhythm slowed down a bit with "Triple X Girlfriend" and "7Rain" but it was only for a while, as the band accelerated the pace to reach another climax with "Body To Body", "Religion" and "Welcome To Paradise". The whole audience was singing along and dancing, and after "Take One", everyone was claiming for an encore. The band came back and played "Im Rythmus Bleiben" and an excellent version of "No Shuffle". A great show!!

To conclude, this Christmas Ball festival was a real success (although the event was not sold-out) and I am happy to say that our two Belgian pioneers of EBM were cleary the best of the pack, as they illuminated the evening with their power, intelligence and perfectionism.

Video excerpts of the Front 242 concert in HD: "Headhunter", "Together" and "No Shuffle"

Pictures of the festival by marquis(pi)X