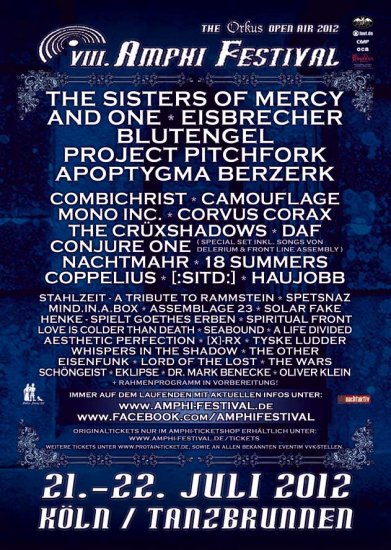 Review of the Amphi festival 2012 in Cologne (Day TWO)

Day Two
Following an awesome first day of festival on Saturday (see review here), day two was an opportunity to relax and enjoy the beautiful sun on the beach besides the Rhine, while at the same time watching a couple of interesting live acts.

Hamburg based band Lord Of The Lost opened on the Main Stage and it was a nice surprise, mainly due to the impressive figure of Chris Harms, the singer. On stage, he is very tall and looks like a devilish Iggy Pop, with a great presence. But he is also a very good singer, who masters the entire range between clear vocals and aggressive death growls. The band played a typical metal gothic rock with electro touches, reminiscent of Rammstein but also of UnterArt (one of Harms' former bands) or Paradise Lost. The reaction of the audience was good, especially so early in the day, like for instance on "Sex On Legs" or "This Is The Life". I also liked "Dry The Rain" with its catchy chorus. The band finished its set with "Blood For Blood" and "Break Your Heart" (see video clip below). Cool gig! Here, you can even watch the video report filmed by the band, with a footage on the stage during the gig...

Next on the Main Stage there was Solar Fake, the solo project of Sven Friedrich (singer of Zeraphine and Dreadful Shadows). Here, complete change of style, we get beautiful synth-pop music in the style of Wolfsheim or Seabound. Friedrich has a great voice, that reminds me a bit of David Sylvian and on stage, he has a touching angelic posture, that makes you want to watch and listen. The band started with the hit "Under The Skies" and there was immediately an uproar in the public. You can see that Sven is basically a shy and discrete person but he manages to create a nice contact with his public and moves around the stage with great ease. He also played "No Apologies", "Parasites", "The Rising Doubt", "Reset To Default" and the beautiful "Here I Stand" (see video below). In "Parasites", his music takes on cyber touches and more energetic vocals, showing an interesting versatility. Great performance!

Meanwhile, in the Staatenhaus, Whispers In The Shadow was the only "batcave/darkwave" band in the festival lineup (with the exception of Sisters of Mercy). This Austrian formation is led by singer / guitarist / composer Ashley Dayour, accompanied by Fork (bass), Martin Acid (keyboards, piano), Reinhard Schwarzinger (drums) and Lazy Schulz (guitars). The hall was far from being full, which is an indication of the lack of interest for this music by the younger generation. It's a shame because the band proposes a nice blend of gothic rock, batcave, tribal and new-wave, which evokes The Mission, Sisters of Mercy, The Cure and Virgin Prunes. Their concert is like a ritual, with long songs that sound like incantations. Ashley is a typical batcave figure with this hat and black dress. One of the best songs was "The Arrival" with 7 minutes of epic and hypnotic music. I would love to see a full concert of them, ideally in a church or any other mystical place! Below is a short clip of "The Arrival".

Next on the Main Stage was the revelation of the day, in our opinion: Aesthetic Perfection. At 2pm, the band gave a great show. Daniel Graves, their leader, singer and songwriter, is one of the upcoming figures in the electro-industrial scene. He created the band in 2000 and their third album, "All Beauty Destroyed", was released in November 2011. On stage, Daniel is accompanied by Elliot Berlin (live keyboards) and Tim Van Horn (live drums, from Mortiis, who also played with Combichrist). Precisely, the link with Combichrist is clear in many songs ("Spit It Out", "Spilling Blood") as well as in the very energetic performance. Daniel is running from left to right and Tim Van Horn's live drums are utterly frantic. But the band truly stands out when Daniel alternates easily between distorted vocals (without digital effects) and 'clear' vocals to sing real songs and sing-along melodies. In "All Beauty Destroyed", "Inhuman" or "One and Only", he broadens the scope and we hear references to NIN, Mechanical Cabaret or even Iamx in the burlesque touches. Daniel's contact with the public is exceptional and all along the concert, the complete amphitheater is moving and singing along to the catchy choruses. No doubt: this band is on its way to become a headlining act! Check them performing "The Siren" below:

After this highlight, it was time to rest a bit at the Beach club and we came back for Mono Inc., another band from Hamburg, that boasts four studio albums, several tours and shows on the biggest dark music festivals. Here again, we have a band that plays the typical German power gothic rock à la Rammstein/Unheilig but what struck us most was the incredible reaction of the audience. There were thousands of hands waving during the band's hits like, for instance "Viva Hades", "Gothic Queen" or their cover of Gary Moore's "After The War". Later, the singer, Martin Engler, took a folk guitar and sang acoustic versions of "Voices Of Doom", their single from 2009, and a cover of Iggy Pop's "The Passenger". Another great moment was the drums solo by Katha Mia. As a whole, a nice concert but it is clear that the German public is much more enthused by this kind of power gothic rock than the Belgian public. Check them playing "Gothic Queen" here.

At 7pm, it was time for Blutengel, the theater show in the amphitheater... This iconic gothic band has always been famous for its shows and this, since it was created in 1998 by Chris Pohl (previously in Seelenkrank and also in Terminal Choice, Tumor and Miss Construction). Blutengel uses melodious electronic tunes in combination with both male and female voices and the songs focus on vampires ideology / imagery. At Amphi, the band were the first to make use of the huge video screen at the back of the stage, to project video's and lyrics. From the very start, when they played "Creatures Of The Night", it was a complete show, of course with Ulrike Goldmann and Anja Milow, the beautiful backing vocalists, but mainly with the four female dancers / performers, who created a different theatrical scene for each song. On the first song, they were dressed in long black leather coats, wearing white masks and waving flags with the band's logo on it. Later, they came dressed like nuns (doing a nice strip-tease), like courtesans or even like mummies wrapped in shrouds. On "The Lost Children", they were fighting for a baby puppet and later one of the dancers ended up topless with blood (or rather plasma) being poured over her. A series of gothic cliché's, of course, but they help to maintain the attention. The band ended the show with "Lovekiller", followed by "Behind The Mirror" as encore. In a nutshell: a good and "classic" Blutengel show, but without real surprises.

Combichrist was playing next in the (packed) Staatenhaus and we were all wondering whether the walls would resist the incredible power of their live sound. Everybody knows Combichrist, the Norwegian aggrotech band, be it only for their huge club hit: "This Shit Will Fuck You Up". Formed in 2003 by Andy LaPlegua (Icon of Coil, Panzer AG), the band got its breakthrough in 2005 with the album "Everybody Hates You" and was pushed under the spotlights by supporting Rammstein in their worldwide tours. After an American folk song played as intro, the band came on stage, composed of Andy LaPlegua, two drummers, one keyboardist and one guitarist. After the first song, "What the Fuck Is Wrong With You?", it was a succession of 'songs' with words like "shit", "fuck" and "blood" being eructed in variable orders. My opinion is that Combichrist has become the Marilyn Manson of cyber-electro: a caricature, a barnum circus in which noise masks a complete void of inspiration. Of course, for those who liked the band or just wanted to dance, the show was perfect and a lot of fans "got their body beats"! Watch them playing "Scarred" below and form your own opinion...

Back at the Main Stage, where And One was headlining the program with a 'Best of' show. No use to present this band from Berlin led by Steve Naghavi. Those guys created what you could call "EBM disco", a unique blend of EBM sounds and rhythms combined with simple, catchy melodies. As usual, And One gave a very refreshing performance, dominated by Naghavi's energetic and genial presence on stage. The band played his greatest hits, among which "Back Home", "Zerstörer" to begin with, followed by "Wasted" and "Love to the End". I was happy to see that the band had abandoned their dark EBM military look and stage design to go back to a more positive image, with Naghavi wearing a white vest à la Dave Gahan and making jokes between songs. During their cover of "Timekiller", Peter Spilles from Project Pitchfork didn't show up on stage... too bad. The band also played "Sometimes", "Für", "Traumfrau", "Deutschmaschine" and another cover: "The Walk" (Cure). "Shouts of Joy", from the last album "S.T.O.P." got nice reactions from the audience. In the encore, Naghavi improvised a new song as world première: "Zugabe", a funny moment... followed by "Techno Man", "To Get You Closer" and "Military Fashion Show". Cool gig!

Finally, another legendary band, Project Pitchfork had the honor of closing the festival in the Staatenhaus. In the early nineties, this band from Hamburg, Germany, created by Peter Spilles and Dirk Scheuber, was at the forefront of the revival of gothic darkwave music (together with Wumpscut, Das Ich, Calva y Nada) by combining elements of EBM & industrial music (Skinny Puppy) with gothic electro and strong and philosophical vocals. After a more obscure and introvert period, they returned in 2005 and have consistently been releasing highly appraised CD's since then.

At the Amphi, the band started full speed with "Continuum" and "Existence". Next on the setlist was "Timekiller", their biggest club hit, which provoked an incredible cheer in the hall. Then it was "Conjure", their huge anthem from "Lam-'Bras": the song is extremely powerful especially thanks to the live drums and Spilles' vocals are simply stunning. He is one of the few singers capable of singing grunts without any effects. After "Lament" and "IO", it was time for another classic: "K.N.K.A". This was also a highlight, especially during the instrumental part in the middle, where Peter Spilles improvised lyrics. Then came "Freeze in Silence", "Beholder", "Steelrose" and the band closed its set with the hypnotic "Fire And Ice". In the encore, they played "Souls", another all-time favorite. When the band left the stage, it was clear that Project Pitchfork had given the best show of the night. Not only thanks to the laser show and the large video screens but mostly thanks to Peter Spilles. Spilles is an incredible showman, he manages to create a theatrical tension with his facial expressions, his constant activity on stage and his incredible vocal power. Moreover, his songs are full of meaning and philosophy. Check the video footage of "Timekiller" below.

More than 16000 people attended this excellent festival, which is clearly the biggest and the best in the Rhine area (Belgium, Netherlands, France and Ruhr). Once again, the German audience proved to be the best public for dark events, first of all by being present in high numbers but also by supporting and encouraging the bands from the very beginning to the end!
Keep the good work and see you next year, guys!

Please have a look at the fantastic pictures shot by our photographer, Xavier Marquis, in the photos area.