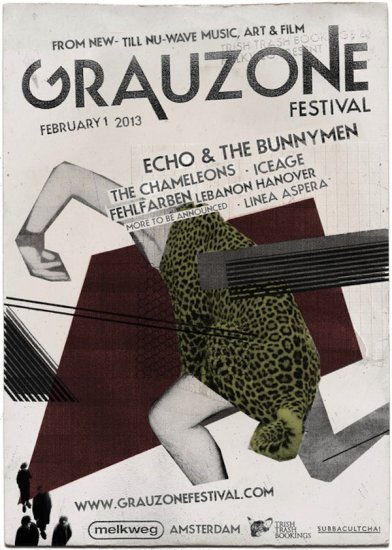 Review of the GRAUZONE Festival in Amsterdam on 1st February 2013

It was the first edition of "GRAUZONE", "a young and ambitious, multi-disciplinary festival devoted to the best in ‘new wave’ music and art". On the program, no less than thirteen bands with a musical spectrum spanning punk, post-punk, synth pop, electro and cold/darkwave but also films, exhibitions and of course afterparties. Well, honestly, this festival was a huge success. The Melkweg venue was full with a majority of people in the 40s and 50s and it was even difficult to move around. There were three stages: the main stage was mainly devoted to the 'legendary' bands from the 80's, the 'Old Stage' was occupied by (mostly old) punk/post-punk bands and the third stage was a small exhibition room, all painted in white, where minimal-wave and cold-wave bands were scheduled to appear. It's true that these bands usually need less room to play but there was clearly a lack of comfort for the artists and the public in this room. A shame because the bands which played there were from far the most interesting bands, in my opinion.

The first act to appear in this Media Room, Linea Aspera, was eagerly awaited. In just a few months, the London duo, composed of Alison Lewis (Vocals/Synths) and Ryan Ambridge (Synths/Programming), had become one of the most promising bands in the synth-pop genre. Their music is very catchy eighties minimal wave topped by an amazing, sensual and haunting voice singing extremely intelligent and touching lyrics. Unfortunately, at the beginning of January, the band announced that they were calling it quits. Their show in Amsterdam was therefore the last opportunity to see them live on stage.

The room was packed when the band started playing "Synapse". Alison Lewis had a wonderful presence with her beautiful silhouette and her very sensual and mysterious voice. Ryan Ambridge was focused on his keyboards. I don't know whether it was because it was their last concert, but there was a lurking violence, a hidden tension during this set. Then the band played "Malarone", a song for which Alison Lewis directed a wonderful, very organic video and the hit "Eviction", a fantastic song she wrote about the death of her cat. During "Detachment", the violence I was talking about became tangible as Lewis started screaming like crazy. It became even crazier on the last song, "Kinabalu", a recent song, more experimental and more industrial. Lewis walked into the audience and moved frantically, screaming like a panther. Ambridge was making as much noise as he could by hitting his keyboard and the show ended in a complete fury. An amazing set, much too short but so intense! We are looking forward to hearing the new projects of these two amazing artists.

Setlist: Synapse, Malarone, Eviction, Lamanai, Syncretism, Detachment, Kinabalu.
Watch them perform "Kinabalu" below...
After the concert, I took the unique opportunity to talk to Alison Lewis about her passions and her future projects: read the interview here or watch it on Youtube here.

Meanwhile, on the main stage, A Certain Ratio gave an efficient show. This legendary band from Manchester created the funk-postpunk genre in the late 70s, together with Gang of Four and later Talking Heads. The band's name is taken from the lyrics of Brian Eno's song "The True Wheel" from the album Taking Tiger Mountain (By Strategy). On stage, a complete band with 5 musicians was accompanying the singer and bass player Jeremy "Jez" Kerr. The atmosphere was hot with soul and funk vibes, and the audience, though relatively quiet, was enjoying the music, especially on classics like "Do the Du" and the last two songs of the set: "Be What You Wanna Be" and "Shack Up". Have a look at an excerpt from their show ("Wonder Why"):

Due to the overlap with the previous concerts, I couldn't attend the show of Ulterior. But I've seen them three times, among others at the BIM Festival (review here), so I know them quite well. Their music is a mix of raw post-punk music à la Stooges and darkwave-electro. It is reminiscent of Sisters of Mercy but with more edge, more pure aggressivity. We were told that their show was less violent, less intense than previous shows.

In the Media Room, Das Ding, the project of Dutchman Danny Bosten, gave its first (!) concert. This electro-pioneer released dark and danceable electro in the 80s, through his cassette label Tear Apart Tapes. The band had technical problems but as a whole, they delivered an interesting set, making the link between past and present. A nice opportunity to go and listen to his recent album, H.S.T.A.

After a quick beer, it was time for Chameleons Vox, the project which Mark Burgess, the original singer of the legendary English band Chameleons, created to revive his repertoire with a new live band, which now includes also the original drummer, John Lever. I consider The Chameleons as one of the best postpunk bands, not only for the music but also for the extremely intelligent and poetic lyrics written by Burgess. On the main stage of the festival, Chameleons Vox played a wonderful set. Burgess was magnificent: he recently cut his hair, which made him look even more like in the 80s. Obviously he has decided to play bass on stage again and it looked and sounded great! After "Swamp Thing", the band played what I would call a 'classical Vox set' including hits but also rather less known songs, hidden jewels like "Soul In Isolation", which lasted more than 9 minutes! At the beginning, Burgess' voice was a bit drowned in the other instruments but as a whole, the sound was very good! I particularly appreciated "Monkeyland", a song that they don't play so often. Watch the live video below! At the end of the show, I had to leave but the band played the classic "Second Skin", one of my 10 favourite songs of all times. I was told that Burgess even indulged in some stage diving at the end: shit, I missed that!
Setlist: Swamp Thing, A Person Isn't Safe Anywhere These Days, Looking Inwardly, Perfume Garden, Monkeyland, In Answer, I'll Remember, Soul In Isolation, Singing Rule Britannia (While the Walls Close In), Caution, Second Skin.

Then I hurried up to the Media Room for another much expected minimal wave/cold-wave band: Lebanon Hanover. I had already seen them in Brussels at a concert organized by Romance Moderne and I was eager to see them again! This duo formed in 2010 includes Laurissa Iceglass, originally from Switzerland, on vocals, guitars and synths and William Maybelline, from England, on vocals, bass and synths. They take their girl/boy vocals, razor sharp guitars and brooding bass-lines to create some sort of synthetic apocalyptic pop, reminiscent of Siouxsie, Cure, Bauhaus or Xmal Deutschland. Some people compare them to The XX but they are much better! In fact, they should have the success that The XX has, in my opinion. Like the other bands in the Media Room, they struggled a bit to get a good sound but as a whole, the set was great! With their songs, they managed to create a very dark atmosphere, which took us in some sort of trance. After two widely acclaimed albums, they confirm their status of leaders on the minimal wave scene. Check them playing their latest single, "Gallow Dance", below:


Unfortunately, I didn't get the opportunity to see Zounds, Fehlfarben, Frank (Just Frank) and The Mob. Clearly, it wasn't a good idea to let so many bands play on three stages in such a short time. Maybe a lesson for next year's edition? After a short cigarette break, I hurried up to the main stage for the show of Echo & The Bunnymen. The famous postpunk band from Liverpool was playing a special long set, revisiting its classical albums from the 80s. As usual, the light show was minimal (Ian Mc Cullogh doesn't like spotlights) and the band was constantly playing in the dark. You could barely see Ian's face but with the camera flashes you could see that he was wearing a beard. Following "Going Up", the usual opening song, the band played "Rescue", the first highlights of the show and the fans began to move and to sing along: "Won't You Come to My... Rescue". The band went on to play "Villiers Terrace" and in the middle of the song, they played excerpts from "Roadhouse Blues" (Doors): fun! The first part of the concert ended with "Seven Seas" and the beautiful "Bring On The Dancing Horses". Then it was just a string of jewels, with "Over The Wall", "All That Jazz" and, to finish, the absolute classic "The Killing Moon", while "The Cutter" brought the final... cut to the concert and the audience seemed to be satisfied with the show. In the encore, they played "Nothing Lasts Forever", with the usual hint at Lou Reed's "Walk on the Wild Side" and "Lips Like Sugar". A great show musically but in terms of human contact with their audience, Echo & The Bunnymen are only an 'echo' of what they used to be....
Setlist: Going Up, Rescue, Do It Clean, Pride, Villiers Terrace / Roadhouse Blues, Seven Seas, Bedbugs and Ballyhoo, Bring On the Dancing Horses, Rust, Over the Wall, Never Stop, All That Jazz, The Killing Moon, The Cutter. Encore: Nothing Lasts Forever / Walk on the Wild Side (Lou Reed cover), Lips Like Sugar

Due to my planned interview with Alison Lewis (Linea Aspera), I only watched a few minutes of Newclear Waves: it sounded much more techno than minimal wave! Clearly Alessandro Adriani feels the need to let his music evolve. I am curious to discover his next releases!

At the end of this festival, the conclusion is that Grauzone has immediately earned its place among Europe's best 'dark' festivals, alongside Summer Darkness, BIM or Amphi. Let's hope that next year, there will be less schedule overlaps between acts and that the lineup will give a greater importance to young new bands, which represent the future of new-wave!

Thank a lot to GRAUZONE and to Natasja Alers aka Trish Trash for the perfect organisation!