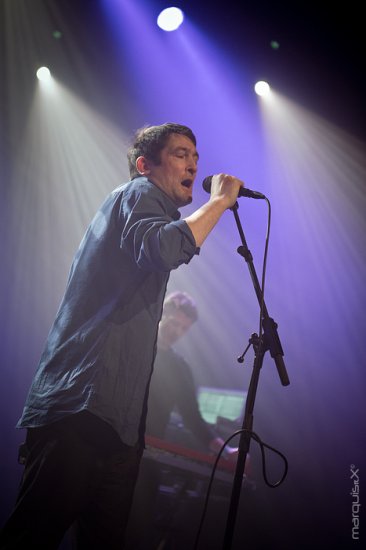 Job Karma had already been a nice discovery on the first day of the festival and here they came back to play with Matt Howden, from Sieben, for this joint act called "7JK": "7" stands for Sieben and "JK" for Job Karma. An interesting musical combination between a neofolk musician and two postindustrial electronic wizards. They played tracks from their very recent studio album "Anthems Flesh", which was released in May 2012. The music was a mix of looping violin and warm vocals with electronics and an industrial edge.

Check the video of "Dirt City", one of their most experimental tracks, below:

As you can see, Matt Howden has a strong and natural "presence" on stage and as a whole, the performance was quite nice! Simply great songs, a wealth of emotions, an amazing meeting of two mindsets for a truly original show.

Check the interview with Matt Howden backstage after the show, in which he talks about 7JK but also about his other projects:

Setlist: Dear Claire, Krau, Wroclaw In The Rain, End Of The Year, Boxed In Green, 47 Words About Sheffield, The World's Pain, Dirt City.