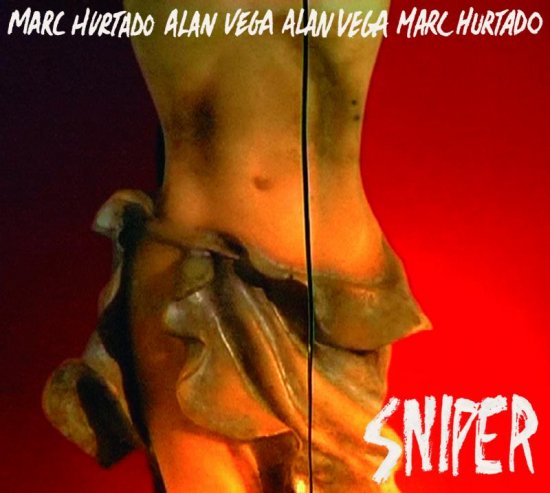 I never counted the amount of interviews I made in my life, but from one quantity I’m sure though. I always asked the artist if they could come up with the best album of all time and it’s kind of amazing how many artists seem to come up with the debut from Suicide.

You see, Martin Rev and Alan Vega are legends on their own and it makes me wonder if they are aware of it themselves, but they really caused some commotion in the history of music.

Alan Vega never disappeared but just like so many artists he was cursed with his own past.
It’s indeed a great thing if the audience is turning you into some icon but it’s a bit painful if those same people don’t care for what you’re actually doing.

Alan Vega got victimized by this as well and even if he can claim that he’s a cultfigure, he can also state that he’s stilling making music.

Alan recently found a new home in the Paris-based label Le Son Du Maquis and his latest work has become a collaboration with Marc Hurtado.

Marc is an artist from the 80’s who founded, along with his brother Eric, the band Etant Donnes, who were quite known in the French underground.

Later on he worked with icons like Lydia Lunch (who is appearing here on a track here as well), Genesis P-Orridge, Michael Gira, Gabi Delgado from DAF-fame and now it’s time to team up with Mr. Vega.

Musically, “Sniper” has become an album that has the same power as Suicide once captured.

While Marc is responsible for the instrumental side of things, Alan moves himself around like the punk he always used to be.
If you never liked what Vega did in 1977, it probably makes you puke but once you made a ride with the ghost rider we bet you will like this as well…