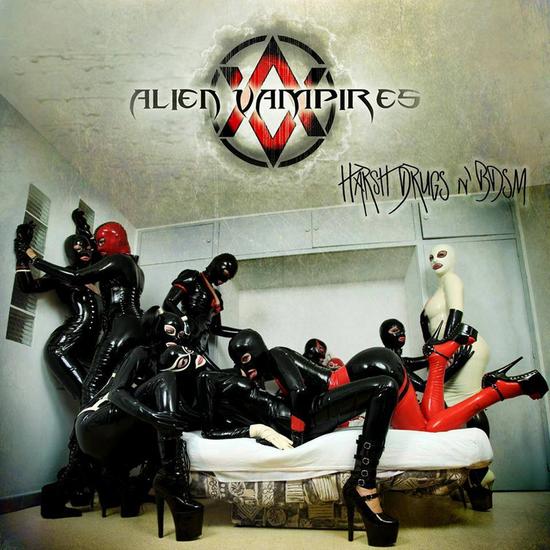 Almost 2 years after the shocking assault of the "Clubbers Die Younger" EP (and yes I reviewed it in the past and looooved it), the ALIEN VAMPIRES gang return to the dance floors with this new instant club hit "Harsh Drugs & BDSM". Faithful to the evil and extreme tradition of the band (just watch the pictures on their Facebook wall and you'll understand), this new track is the emotional outburst of months of adrenaline-pumping touring and heavy hedonistic partying times in strip clubs across the globe... Loud, fast, hard, rebellious and hypnotic the title song gets the remix treatment from dance floor specialists like: MODULATE, ESA,W.A.S.T.E, SPEED INJEKTION, STATIK SKY, D.K.A.G....

While the bonus B-sidetrack simply says it all: "Fake Blood Is For Cunt"(from "Evil Generation") "We live according to our rules, we don't kiss anyone' s ass and we hardly accept any compromise. Move on if you don't like it because this is one way trip to our hell". well said!

For once it's nice to read that the promo talk is correct, thumbs up for the one who wrote it!

I just partied from the first song until the last remix of it!

I loved the ESA mix as the song gets a more rhythmic industrial and very club minded sound! Great work and a good tip for the fans! Just as the Speed Injektion mix (a real clubber).

So, yeah, we got the party going on and you?