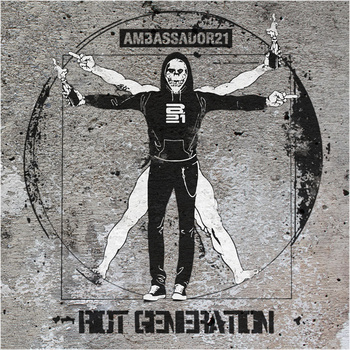 Riot Generation is the new album from Ambassador 21. The band already excists for over 13 years now, and was founded by Natasha and Alexey Protasov, both on vocals and electronics.

This album is released on their own A21-label. The new album from this Belarus duo is what you can expect, a digital hardcore sound, lots of aggression, heavy techno beats, blading guitar samples and more heavily distorted soundscapes. Most lyrics on this album are half English,half Russian.

Riot generation, includes the new self titled track, and new versions of 'Fuck All Systems' and 'Dope On'. The titel track deserves to become a new power noise dancefloor killer.Most remixes are realy good, and bring something new and powerfull to the tracks. My personal favorite is the remix by 'Stormtrooper', hard and heavy beats for you to get out of control on the dancefloor. Followed by the remix by ' The Outside Agency', easily usable as a soundtrack for a triller movie. More mixes on this album by, 'End User', 'TREPONEM PAL', 'The Teknoist' and 'Xotox'.

So not many 'new tracks' on this album, but for the hardcore lovers, there is enough new 'noise' available for you to melt down your stereo with.