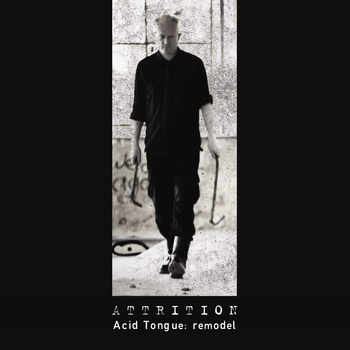 Atrrition was formed in 1980 by Martin Bowes and Julia Waller in Coventry, and influenced by bands like Portion Control and Test Departement, and known for their mix of experimental and traditional sound, electronic and accoustic sounds.
In 1996 they made the album '3arms and a dead cert', and one of the best known tracks was 'Acid Tongue'. Martin Bowes was asked if he still had the masters of this track, and although the original track was recorded on 8track, Martin managed to copy the sound to a DAT tape. And this is the final result , 3 remixes of Acid Tongue, one from prototype (Texas) and 2 versions from BBCom (Germany).
And you know what?! It works, the tracks really sound great, and the original rework even sounds better now, with the hard pounding beats on this new tracks. This is a real dancefloor killer, and a very nice way to start 2014!