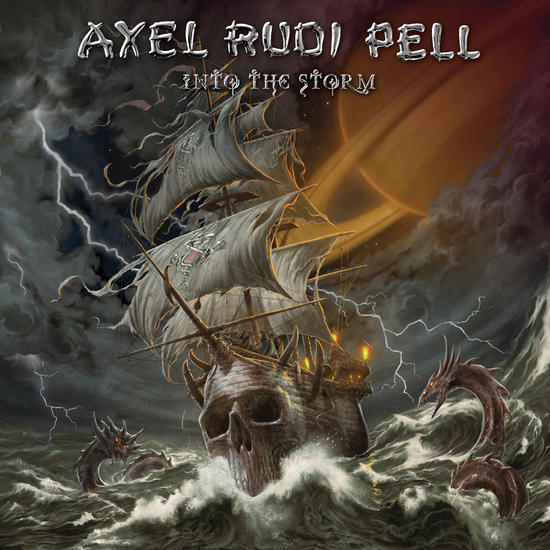 There aren’t many artists around whose career has already lasted a quarter of a century. But then, there are even fewer who have experienced no setbacks whatsoever in 25 years. And there are only a few guitarists in the world of rock music who have created their own brand just with their name, causing over 1.5 million people to buy their music. Axel Rudi Pell is one of these rare exceptions. And so it doesn’t come as a surprise that his latest offering “Into The Storm” is also one of his best; after all, anniversaries are always special. Although this is the fifteenth studio album (featuring his own material) in Pell’s career to date, he didn’t approach it any different than its predecessors. “There hasn’t been one day in my life when I haven’t been pushed by Ronnie James Dio’s spirit to write something mystical,” the 53-year-old explains his motivation.

So far the promo talk for people who don't know this one at all... I love the artwork, to start with and it triggered me to start listening to it! You get 8 hard Rock songs and one great cover! The opening track is just a musical intro to get started. So 'Tower of Lies' is the real starter of the album and the guitars throw right away a bomb in the house, whilst the drums follow gently. Love the screaming vocals, very energetic, just as the guitar solo! Love the studio work and great mixing, it all sounds so well, perfectly blending in! You can feel the energy and believe in the lyrics! 'Long Way to Go' sounds like the better version of Bon Jovi! Love the vocals, the music and the catchy chorus! I'm also a big fan of melancholic music and I can hear what my heart loves so much! 'Burning Chains' starts with roaring guitars and exploding drums. The fight has begun and is lead by a great voice! 'When Truth Hurts' starts with a piano, a true ballad with real pathos! This song won't make it on a wedding, but still it is a great song! Love the bluesy sound of the guitar and the melancholic voice! This great song speeds up 'Changing Times' whilst 'Touching Heaven' gets us more into a romantic mood with a great ballad starter (and explodes into a more metal minded fired up song)! 'High Above' is a nice screamer of a song with nice synths in the background! One needs strong balls to take over 'Hey hey my my' from Neil Young! The version I hear is piano and cello orientated and is sung with heart and soul. One can easily fuck up this song, but what I hear gives me tears because of the emotional approach. Those who know this song know the history and the sadness of it. For me this song could have easily been the end song, it gave me goose bumps and the feeling that it's over after this one. It's simply the highlight of this album, a master’s version! It's also great to hear the wall of sound in the end and the typical Neil Young guitar sound just before getting back to the Axel Rudi Pell version! The last song is the title track and that one starts with mysterious' sounds before the guitars attack and the synths team up with the drums! Love the little Arabic sound that pops up from time to time! An epic and very melodic trip into the storm!

I loved the voice, the melodic sound, it all fitted in well and felt fresh and powerful! It was a real pleasure listening to it for 24hours before having to jump into another review! Thanks a lot for the great trip and hope to catch you in the Biebop in Vosselaar (4/10/2014)!