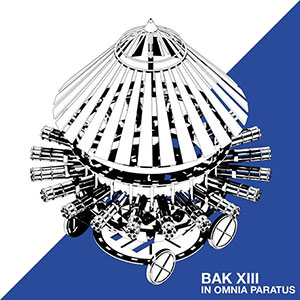 Bak XIII was a discovery for me, when I got to know them a few years ago. First acquaintance came through my brother-in-law who saw them live in Tournai, together with Dolls of Pain. The week after that particulargig, he pushed the cd's he bought in my hands and forced me to listen to it. I was immediately sold!

Although the band has quite a high hit-potential, it was very strange that the Belgian scene had not fallen yet for this band. The gig in Antwerp with Hocico in november 2010 should have been the turning point and it was (at least on a low scale): as the public digged it!

And now, some years after this impressive gig, their new album is ready: In Omnia Paratus. In the mean time, we are already familiar with the sound of the band and I dare to say: if you hear a track, you immediately recognise Bak XIII, even though they have some different genres woven throughout the album! At some point I remember some words of a fellow clubber: they sound like Welle:Erdball on steroids, they sound oldschool, they sound refreshingly new... and that all in one!

In the past, "Open the borders" was often in my sets. But after receiving this album, I'm sure that tracks like "Happy as fuck", "We are alone" or "Headbanger" could easily make it too!