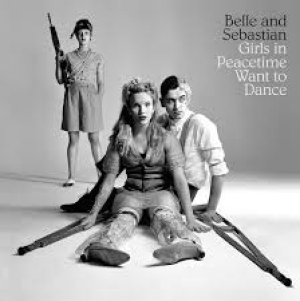 Girls In Peacetime Want To Dance

Not so long ago, Glasgow's feted storytellers could cause palpitations among sensitive souls with a string of collectable E.P.s and strong albums. Nowadays, after a plethora of indifferent releases and indifference among reviewers, save for the excellent The Life Pursuit, B&S find themselves at something of a creative and critical crossroads once again. Things aren't looking too brilliant after the two opening efforts on this their ninth studio-album - fairly straightforward mid-tempo observational trademarks abound on both Nobody's Empire and Allie - before the party starts in earnest. The Party Line to be exact.

Remember that ace Saint Etienne album Words and Music, from a few years ago? This could well have been its bastard son - Stuart Murdoch goes disco, in the loosest sense, not once, not twice but three times. Enter Sylvia Plath also borrows from Pet Shop Boys et al, with its pulsating synth-bass and trippy hi-hats, while Play For Today isn't a million miles away from Love Is In The Air if it were written by The Lightning Seeds. Those seeking gentle solace can immerse themselves in the rest of this generally fine album - a welcome improvement.