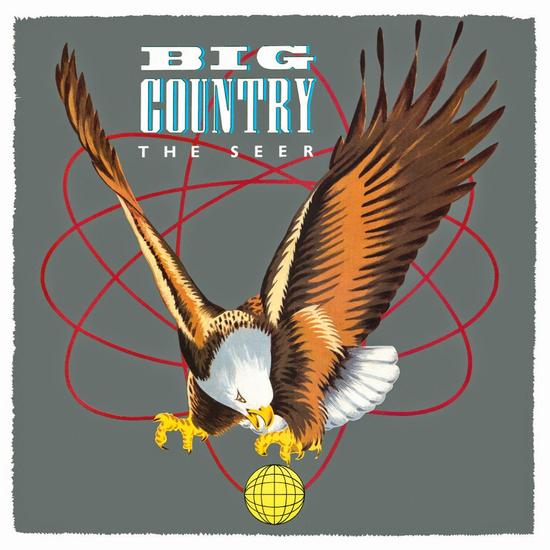 Brimming with confidence after the earthy debut-album The Crossing and its rather more industrialised follow-up Steeltown, Big Country delivered a more anthemic sound for their third set The Seer. Originally issued in 1986 and the provider of the band's biggest hit Look Away (#1 in Ireland, no less), it's curious to see this collection getting re-released ahead of Steeltown (due September 2014) but hey-ho, The Seer is in keeping with the band's creative peak and the success that Stuart Adamson's charges were achieving on both sides of the Atlantic.

This 2xCD version gathers up the original running order which includes a handful of other Top 50 hits including The Teacher, One Great Thing and the reflective single that broke their unbroken run of ten straight hits, Hold The Heart - frankly, the jaunty Eiledon would have caned the Top 20 no problem had it been clipped for release.

The extras on the two discs include the complete Restless Natives soundtrack plus full versions of soundtrack selections (including an unreleased take on the title-track), plus a live cut of Honky Tonk Woman and numerous 12" mixes of the singles including the alternative versions of One Great Thing - the rather dated Bowie-esque Big Baad Country Mix (it's a bit Let's Dance crossed with Fashion) - and the brassy Outlaw Mix of Look Away. Ah the days of tricksy extended mixes.

Informative sleeve-note, lyrics and an Adamson anecdote complete the picture of an album that sounds 'of its time' but is nonetheless a lively and enjoyable journey. For many, including me, The Seer was Big Country's last truly decent album. The 1989 follow-up Peace In Our Time smacked of an attempt to appeal to the US just a bit too much - that too has just been reissued ahead of Steeltown.