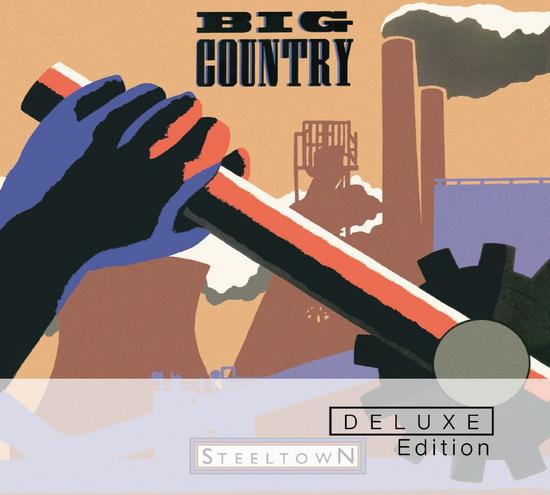 Tucked in between Big Country's organic folk-rock debut The Crossing and the stadium-friendly The Seer was the strident fist-pumping, chart-topping Steeltown. Sounding remarkably fresh and fearless some thirty years after its original release, Steeltown remains a powerful, intricate and proud album that deals with industrial decline, political power, social unrest, community spirit and transience.

Partly inspired by the migration of Scots to the industrial outpost Corby, a gritty steel-town in Northants' once-productive heartland that provided labour, food, clothes and shelter for Caledonians, the band's second full-length set superseded its predecessor by being stoic and solid, vivid and vivacious, loud and proud and arguably more of a statement of the times than The Crossing. Live shows on the Steeltown tour were notoriously emotional (as well as pin-sharp musically) and represented Big Country at its peak.

The hits were plenty though not Top 10s - East Of Eden, Where The Rose Is Sewn and Just A Shadow might not have replicated the heady heights of Chance or non-album cut Wonderland (included here) but ably demonstrate Big Country's adept ability to turn a tune on a penny and convert it into nothing short of an anthem. Rose Is Sown sounds as explosive today as it did in 1984, a credit to Steve Lillywhite's widescreen production and arrangement, while Come Back To Me (a single that should have been) triumphantly displays both band and producer's more plaintive side.

The bonus disc includes numerous radio edits, rough mixes and b-sides recorded at the time, including the gargantuan Giant (plus its sister mix, All Fall Together) and under-rated flip Winter Sky, as well as cracking early mixes of Tall Ships Go and Where The Rose Is Sewn.

Big Country are often overlooked when the '80s are celebrated which is criminal considering just how celebratory their output was - Steeltown is the go-to album for the curious, an ideal starting point for those demanding big music with a big heart.