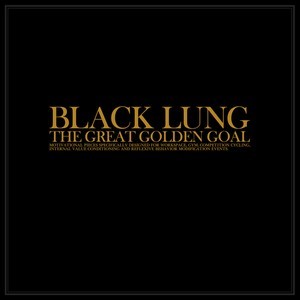 After the World cup soccer we know who made the Great Golden Goal, but BLACK LUNG probably had something else in mind when they created this album. When you use the subtitle ‘Motivational Pieces Specifically Designed For Workspace, Gym, Competition Cycling, Internal Value Conditioning And Reflexive Behavior Modification Events’ you know you got something else than the typical Ant-Zen release.

Although songs like ‘Consumption Deluxe’, ‘We Dream Of The Pyramid Scheme’ and ‘The Trickle - Down Effect’ are strange and electronically layered enough to get classified as typical Ant-Zen. Those songs are probably for the internal value conditioning and not for reaching any high goals in sport.

Most other songs are however up-tempo, easy to the ears electronic songs you can dance, sport or train on. Listen for instance to opener ‘The Business Of Selling’, the title track, ’Hype & Drive’ or ‘The Cold Call’. Maybe not your typical workout music, but also ‘underground music lovers’ need some music to practice on. In the end; ’The Bortherhood Of Saturn’ is a classic mixture of soundscapes with a western (Ennio Morricone) soundtrack. Love it!