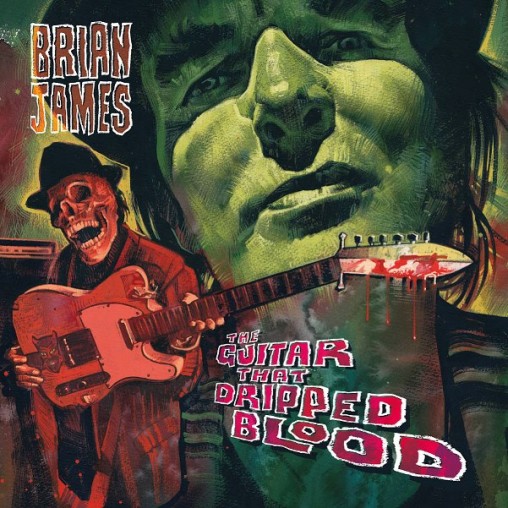 The Guitar That Dripped Blood

Brian James started as a guitarist for the punk band London SS, as he was trying to fill the gap Clash guitarist Mick Jones left. However, it was a very difficult start. James made a deal with drummer Rat Scabies to form The Subterreans. They invited Sid Vicious and Dave Vanian for an audition. Sid, of course, did not show up, but Vanian proved to be extremely suitable as a singer. With Captain Sensible on board, they started the phenomenal The Damned.

Brian James played guitars on what is the very first punk single (New Rose) and the first punk LP (Damned Damned Damned). The Damned is also known as the first punk band that split up - we won’t count the various bands that didn’t survive their first rehearsal - and they were also the first to reform. But that was without Brian James.

James then founded Tanz Der Youth, and later Brian James Brain’s (also known as The Hellions). He accompanied Iggy Pop on his US tour in 1979, along with Sex Pistols member Glenn Matlock. But his most important contribution to music history was The Lords Of The New Church. They were founded in 1982 as a kind of super group with Stiv Bators (Dead Boys), Dave Tregunna (Sham 69) and Nicky Turner (Barracudas) and of course James.

James remained in the band until they split up in 1989 - a year before the death of Stiv Bators - and years later he revived the band with the new singer Adam Becvar. James was involved in many other bands too, and he also released several solo CD’s, including the acoustic blues album Chateau Brian and one that contained some alternate versions of early Damned songs: Damned… If I Do.

The Guitar That Dripped Blood is based on James’ reputation. What would you expect from him, besides some dirty rock? Punk remains a major influence, but psychobilly is also included. The CD is a collection of short straightforward songs. Cheetah Chrome (Dead Boys) and Adam Becvar are also involved.

It must be said that the songs have a quite simple structure, and that we should not seek any profound meaning in the lyrics. But that is not the intention of Brian James.