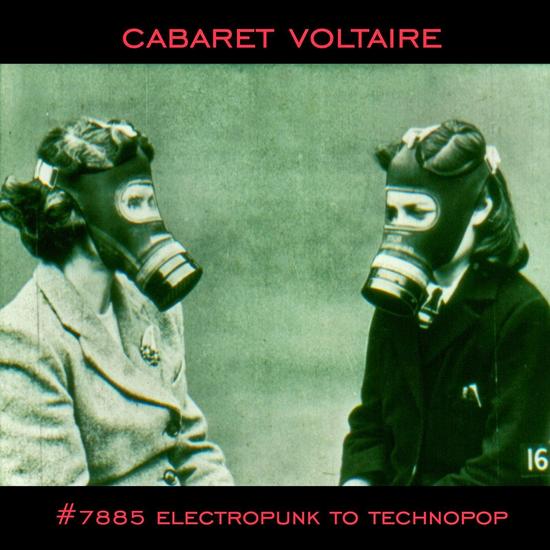 Previous compilations and reissues of the Sheffield outfit's most prolific and acclaimed era have so far failed to tell the whole story. The Living Legends, Conform to Deform and Sound of Sheffield collections either concentrated on Chris Watson, Stephen Mallinder and Richard H. Kirk's edgy early material or the jagged metal-funk period on Some Bizarre/Virgin when the band were a duo on a mission (Watson had long since left to pursue sound-recording for David Attenborough, among others).

Blessed with as descriptive a title as you could wish to employ, Cabaret Voltaire's key epoch is finally revisited in combined form. #7885 isn't definitive by any means, nor does it concentrate on extended mixes or anything later than 1985 - so forget getting any of the Plasticity material, or the R&S/Apollo output which went largely un-noticed in the mid '90s. You also don't get Yashar, Sluggin' Fer Jesus, Gut Level or any other Factory/Crepuscule imprinted tracks that sit within the timescales of the album's title - this is all about Rough Trade and Some Bizarre. And Mute who now handle their catalogue.

Comprised of 19 tracks hand-picked by Kirk, #7885 features a first-half drawn from the earlier singles such as the skank-tastic Silent Command, the sinister click-track of Seconds Too Late and the still-disturbing Nag Nag Nag, a remarkable track that sounds like Stevie Wonder's Uptight being bawled through a megaphone in a hurricane. The second-half stars Sensoria, I Want You and similar landmark singles that propelled CV onto late-night radio and student-disco playlists, mostly presented in edited form. Collectors might be sweetened by the inclusion of 7" cuts of Kino and Big Funk, both usually presented as eight-minute monsters from the Drinking Gasoline project.

Of interest to curious onlookers are the inclusions of Red Mecca's Landslide, 2 x 45's Breathe Deep and both sides of the Crackdown/Just Fascination single. Here lie three pivotal points in Cabaret Voltaire's musical development, the creative adhesion that glues the old and the new together. It's a subtle transition. Landslide is a piercing metallic shuffle that lasts just over two minutes yet demonstrates how Kirk and Mallinder never compromised, even when it felt that they might have been tempted. Yes, there's a straightforward 4/4 rhythm. No, we won't make it approachable, we'll crank up the treble and drive you mad. Round holes, square pegs and triangular rhythms - this was the Cabaret Voltaire norm. The rough with the smooth.

Breathe Deep takes this ethos further by employing atonal brass stabs throughout the mix but also inserting some spine-tingling bass and shoe-shuffle drums fit for the purpose of, shock, dancing while Crackdown is immeasurably brilliant and a majestic intro to the pair's major-label term (which returned just one hit album). Not one of their stunning singles breached the Top 75 (James Brown, I Want You, Sensoria. SENSORIA, ffs), a bewildering fact made all the more incredible when you remember that their later (and less ground-breaking) industrial-house releases on Parlophone did chart. Hey ho, the power of marketing perhaps.

Overall with #7885, Mute have successfully joined two portions of the Cabs illustrious and influential career by assembling nineteen bite-sized career highlights, albeit with a couple of glaring omissions.