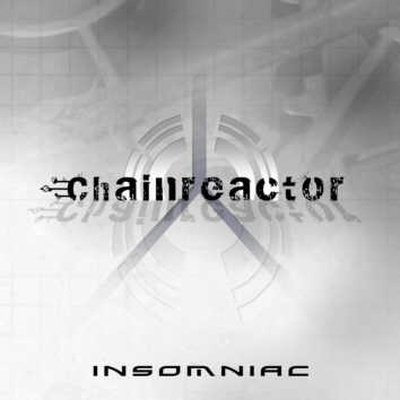 Chainreactor is a project formed by Jens Minor. After the release of  “X-tinction” in 2009, he felt that he was on the right path but he wanted to take things a bit further.

Not only is he the sort of musician who doesn’t believe in compromises, he also defends the idea that you better use all attributes in the maximum way. (Anyone who can read between the lines knows that this is nothing but an excuse to come up with some loud dancebeats.)

“Insomniac” couldn’t be a better title for this cd as it is indeed a collection of hard dancefloorkillers that flirt with techno, cybergoth and EBM in its hardest sense.
Due to that, this album can sound a bit monotone especially as the only variation is the amount of beats per minute!

Musically it can be best compared to Noisuf-X and just like them, Chainreactor loves to come up with some statements (most of the times in German) like “Ein Reactor macht kein Fehler, nur Mensch macht Fehler” and building an anthem of beats around it.

For the living room it will be rather hard to keep on listening to this for the full 70 minutes but it certainly contains enough powerful tracks that can make it on the alternative dancefloor.

Apart from the 12 songs you get the usual remixes, done by Incubite, (X)-Rx, Xotox and Organic Cage.