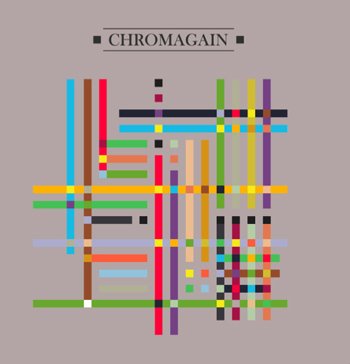 Any colour we liked

The German label Anna Logue Records decided to collaborate with the Italians from Mannequin with the main aim to come up with the best from the minimal synthpop/ wave past.

One of the bands they recently picked up are Chromagain from Torino, and you don’t have to have that much imagination to see that this cover has been inspired by New Order’s “Confusion” -12”inch.

This record was originally released in 1985 and featured the mighty sounds from the famous Roland TR-808.

The funny thing about this album is that you hear so many things from the 80’s. “Satisfied” sounds like the mighty Trisomie 21 where as “After the clouds” has the melancholic touch from Sad Lover & Giants…and hey, didn’t we hear echoes from “Kao Bang” by Indochine in “Spot”?

Highlight of the album is without any doubt “Season of steel” which shows how beautiful coldwave can be.

All by all it’s quite funny that back then this band will have been slashed down by the press as they would have been considered as faceless and one of the many. Today we’re in desperate need of such sounds and we call it now something like a classic….yeah, recommended stuff!

Available on vinyl & cd. Cd-version has 5 extra tracks of which some are even better than the original MLP.