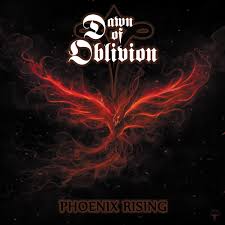 The Swedish goth metal act Dawn Of Oblivion exists almost 25 years. Without exaggeration you can say that Phoenix Rising is the icing on the cake. Their fifth album is recorded in the famous SafeHouse Production studio of James Murphy (Testament, Orbituary and Death). It is their most varied and best album to date. It also is a special CD, because after numerous personal tragedies and all sorts of changes within the band, this record is one with the original line-up (hence the title).

Demons Of The Cross is a bombastic start. The goth guitars are catchy and fans of Love Like Blood surely will like it, especially with the addition of the delightful keyboards!

Dawn Of Oblivion is a band with a diverse sound, that is proved on Anubis. If Killing Joke would record a goth metal song once, it definitely would sound like this. The guitars glide over the song in a lovely way, and although we will be the last to say that it is an original sound, it sounds damn good!

In Catherine Wheel there is a lot of melancholy, The Black Pilgrim has again something theatrical. The Pathfinder has a superb soundscape of guitars, complemented with a wistful voice. The best track on this album is undoubtedly Within The Realms Of The King Of Amur. On Path To Gehenna the melancholic synths are perfectly linked to the fast guitars. Years possesses all the ingredients a goth rock anthem must have, Fields Of The Nephilim is never far away.

During 25 years Dawn Of Oblivion floated between goth rock and goth metal. For people who love to put music in a category, this is not an easy band to deal with. Never mind, Phoenix Rising is a very strong album!