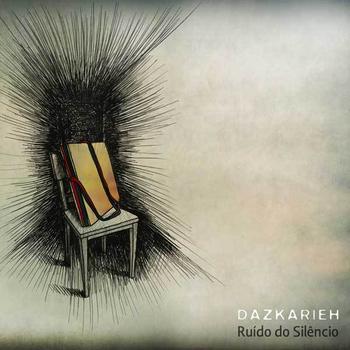 Don't try to start investigating what Dazkarieh means as according to the band themselves it's just a magical word of unknown origin and it might have something to do with the energies that are released when several worlds, essences and influences touch each other.
With that your suspicions are more than justified, as this Portugese band are making the sort of music which is a bit out of this world.
They absorb their influences, in part, from everywhere and so since 1999 this four piece-band have been making what they describe themselves as a folk-gothic sonority band. "Ruido Do Silencio" is the band's fifth album and they claim that they seen the whole world, which is rather strange for a band who is so loyal to their Portugese roots.
On the other hand, it's perhaps that loyality which doesn't make them sound like "just another folk band". Fanatics of obscure instruments will lick their fingers as you get served with instruments like a shruti-box, Portuguese bagpipes, a cavaquinho or a pandeireta.
Their folkmusic is subject to genres like pop, prog-rock and some metal. A strange combination but apart from Joana's ethereal vocals this band can compete with the likes of Subway To Sally or Tanzwut if you skip the bombastic sound and the image that goes with bands like these.
For sure, an album you either love or hate (not mentioning the fact that this is sung in Portugese). But if you like a rock-inspired folk-pop band, we think you might like Dazkarieh and if not, then you better avoid.