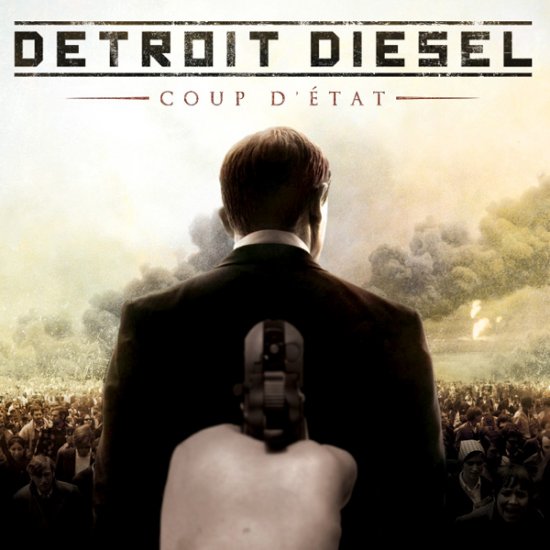 DETROIT DIESEL does not need any introduction for all you cyber electrofans. The industrial, almost hardstyle tracks from the band are now already being played grey by the DJ's in the genre.

It should be no surprise that the complete Coup d'Etat is one long and hard partydisc. Pounding beats, hypnotising arrangements and arousing bleeps... And even 'meaningful' lyrics (who could have known?): Fell for sexy psychosis / it was no magnetism / but the vacuum of your void / that did attract me to you. Just to say that not all lyrics in the genre have to be dark...

Sometimes I feel the vocals could do with a bit less distortion... Like in Never Looking Back a smoothening voice could bring the message so much more sensetive...

Almost a must on every release these days are the remixes, which follow as an extra on the disc. I still look at remixes as being mainly a kind of extra for the fans, because most of the remixes produced cannot keep up or lift the level of the original track. Smaller bands use it to brag about the 'big names' who were so kind to remix their music, but here, I must withdraw my critics. No namedropping on the sleeves, although remixes are provided by Aesthetic Perfection, God Module and Xotox, and versions that really make the tracks more complete, change context, but keep the original in mind.

DETRPOT DIESEL: growing in the club scene and It seems like they are intended to stay for a while!