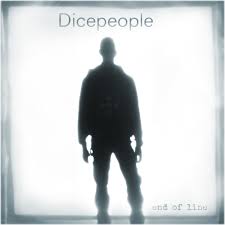 Dicepeople is a progressive audiovisual collaboration between Matt Brock (music) and Rafael Filomeno (visuals). End Of The Line is the band’s third album. Their previous albums received great critical feedback, but they did not reach a big public yet (at least not, if you check the likes on Facebook or views on YouTube.

Dicepeople’s tagline is: dark electronica for the body and mind. I would change that for the open mind. It’s not the typical dark electro they make as their music incorporates also cinematic, trip-hop, ambient and IDM-elements.

When reviewing a dark electro band, it’s easy to say that their music is multi-layered, but in Dicepeople’s case it definitely is.

Outstanding tracks are opening track Bruised And Dissolution with its catchy chorus and lyrics. Hurt with its guitars would fit as an old The Cure-track, but the guitar are never prominent, they just blend in. The spoken vocals of guest singer Kyrea (one of the few) reminds me of Sonic Youth’s Kim Gordon. Another track worth to mention is the atmospheric ambient track Death Drone. End of line is a nice polished album. This band deserves a bigger audience!