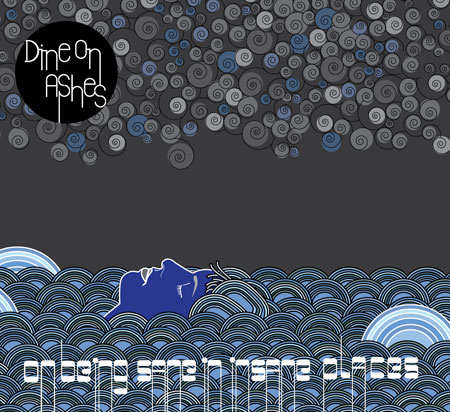 On Being Sane In Insane Places

Fans from Belgian coldwave-bands might remember Transparent Curse as this is the newest band from one of their founders, Wim Dielen. In all honesty before this cd dropped in our mailbox I have never heard from this band, but I'm quite glad I did as this is superb elektrogothpop.

What did I say elektrogothpop? I know it makes no sense, but if you could imagine how Nightwish would have sounded if they were accompanied by minimalisted synthetic sounds, I guess you'll have an idea what they're making. Dine On Ashes have lots of strong elements in their music and I guess the strongest of them all is the ethereal voice from Katherine De Groote who also wrote the lyrics from all the seven songs that graced this mini-album. I know I'm using a cliché right now, but then again they're created as they're the truth, but this album is a real grower and that's because of Wim's musical approach. The first time you do nothing but shrug the shoulders as the first impression is "nah, that's OK", but the more you hear it (and I played it five times in a row, so that's a proof to me!) those little sounds are getting a grip on you, something like only Colin Newman could.

Great album from a band that has a great future if it depends on us, so where are those gigorganisators as we want to see them on a stage! Check it out here!