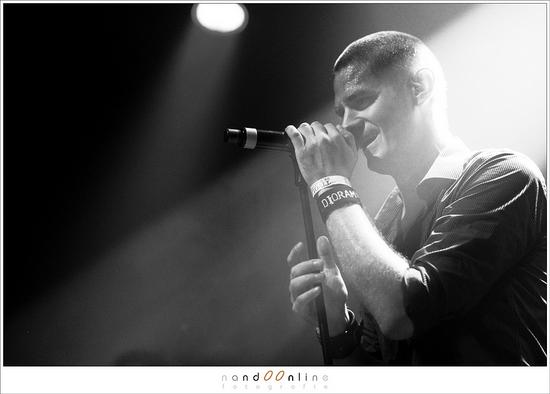 Diorama is one of the best kept secrets in the music industry. Since its debut in 1999, this band from Reutlinger, Germany, has been consistently delivering bewitching darkwave pop, characterized by inspired melodies, Kafkaesque lyrics and very rich arrangements. Originally formed by Torben Wendt, composer, singer and classical piano player, Diorama has evolved to become a band, including Torben's long-time fellow Felix Marc (also in Frozen Plasma) on keyboards, vocals and co-production, Sash Fiddler on guitars and Markus "Marquess" Halter on drums.

Diorama was one of the opening acts at the Summer Darkness festival in Utrecht. They played in the 'Tivoli De Helling' and the least you can say is that it was hot. Not only because of the very high temperature (more than 30° outside) but also because of the amazing energy that the band puts in his shows. Unfortunately, the concert started with a short delay, reportedly because of technical problems with the beamer and the video screens. The band is currently promoting its new album, "Even The Devil Doesn't Care" (Accession Records), and logically started the show with "La Maison Du Tigre", a nice trip-hop-ish song which received its title from the name of the hotel near Strasbourg where the band met to work on the album. On stage, Torben Wendt was standing in the middle and by the way, he has cut his hair, which gives him a sort of military look; Felix was on the left with his SIRIUS keyboard, Marquess behind and Sash on the right.

The second song was another new composition, "The Scale", and it really confirmed its status of potential hit! The strong beat and the catchy melody provoked the first wild reaction in the public and a lot of people were singing along "Come On and Celebrate, Everyone, Everywhere..." Torben Wendt was, as usual, like in a trance, completely focused on his singing and producing a very intense feeling of energy...

During the next part of the concert, the band revisited some of their greatest hits, with jewels like "Exit The Grey", "Ignite" and of course, probably their biggest club-killer: "Synthesize Me", from the masterpiece album "A Different Life". These songs are archetypes of intelligent electro/synth-pop music, with very danceable beats and great melodies. Check the band playing "Exit The Grey":

During "Advance", one of their first hits (from 2001), the temperature rose even higher and both Torben and Felix Marc invited the public to shout and clap their hands. There seemed to be a lot of fans in the place because everyone was moving, shaking the head and/or singing all together during the chorus: "Carry me,...". In this period (2001), they were still a bit influenced by Diary of Dreams (Adrian Hates discovered Torben and produced the band's first album), but later, Torben created his own universe and, in my humble opinion, overtook his master...

The third new song they played, "Hope", also produced a very good effect on stage: the song has a slower rhythm and a haunting chorus line: "Is it your Hope, your Hope..." Like many of the band's song, it conjures up a very deep (East European) melancholy but at the same time, urges you to celebrate and believe you can reach for something better.

Unfortunately, the set had to be reduced and the band had to suppress two songs. They ended the set with another hit from "A Different Life": "Why". As soon as Felix Marc played the four notes of the keyboard riff, the public reacted and sang along. Later in the song, Torben Wendt played the piano (what a wonderful classical technique with typical romantic thirds!) and Sash, a great (kind of metal) guitar solo. A great ending for a much too short concert! Too bad the organizors could not (or did not want to) adapt the schedule a little bit. Anyway, it will be a good reason for the fans to go and see Diorama at one of their future shows!

For all the others, don't hesitate to discover this amazing band. It's a kind of crossover between Depeche Mode, Muse, Diary of Dreams, NIN and Porcupine Tree... but with a unique signature. Support them so that they finally get the success they deserve so much!

After the show, Torben Wendt was so kind as to give us an exclusive video interview: to be continued!

Other reviews from DIORAMA
DIORAMA • even the DEVIL doesn't care