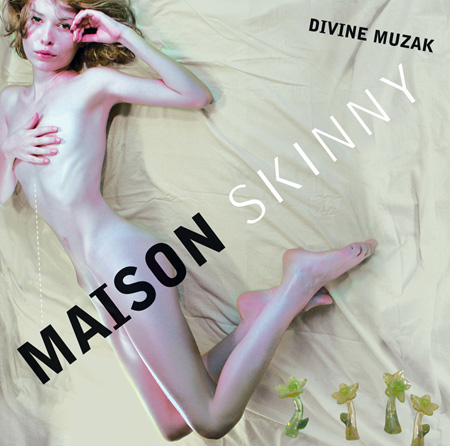 A tiny Italian label that recently caught our attention is Punch Records. One of the artists you can find there are Divine Muzak, fronted by Julie and Dan who found each other at some a goth reunion in Bucharest.

The legend says that Julie walked towards Dan, asking him to form a band but with one condition: she never would take something like a vocal test.

This scenario might comes straight out of the Amélie Poulain-movie but a year later the two delivered "Dialogue" that deals about each other’s fantasy of rape.

Again on their newest cd that's been described as "hospital pop", they didn't avoid the controversy as not only Julie poses her totally naked on the cover, their lyrics are all about sex.

Musicwise "Maison Skinny" is a strange melting pot of poppy avant-garde stuff in where accordions (yeah, even Beirut-like atmospheres) that are linked to electropop but mind you, most of the times it stays pop to the core!

It's even a record that will certainly appeal to all the minimal synth fans, as tracks like "Vienna" are popgems that should work fine on some Wierd-playlist.

Perhaps it's a bit sad that they escape the pop route a bit too often (as that's surely the best direction they can go into) but still : if you wander around some little recordshop, grab your record dealer (Smurf from Wool-E for instance) beg for headphones and who knows you might fall in love. Just don't stare too much at the cover!