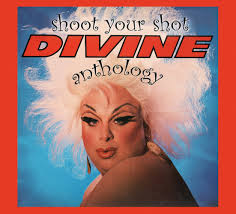 Try to come up with a classic disco anthem that’s not composed in the 70s. The Changes are that you will mention Shoot Your Shot by Divine. Normal now, but in July 1984, it was controversial. BBC viewers wrote letters because they were shocked after seeing a travestite on Top Of The Pops. Divine (the artist name of Harris Glenn Milstead) was someone people talked about.

Divine was discovered by cult director John Waters, who was always interested in freaky creatures. He played his most known role in Pink Flamingos, but after his film career, Divine wanted to show the world that he was able to sing too. He teamed up with the famous producer Bobby O, the founding father of the so-called Hi-NRG scene (disco that’s been influenced by Italo Disco with acts like The Flirts or Amanda Lear).

Tracks like Walk Like A Man, You think You’re A Man and I’m So Beautiful did well in gay clubs. Clubby anthems were born, and Divine quickly became a household name in the disco underground.

However, the big success (especially in Europe) came when Stock, Aitken and Waterman (the trio that later would launch the career of icons like Kylie Minogue or Rick Astley) worked with him.

Everyone has an opinion about this golden hit machine. I was hated by many, but this trio could write tunes, even if the tracks sounded similar most of the time. That was also the case with Divine. The sublime Love Reaction sounds as a copy of Shoot Your Shot. No doubts about that, and you definitely hear more Stock, Aitken and Waterman than Divine, but after all these years, you can only describe these tunes as immortal classics. Harris Glenn Milstead can’t even sing, at least not in a technical way, but he (or she, if you want) did it with passion.

In the mid 80s, Divine disappeared from the charts, like any other disco act. Some weeks after the release of Hairspray by Waters, Divine died in a hotel room because of an enlarged heart. He was 42. For some he only will be the performer of cheesy disco songs, some will talk about a guilty pleasure (I hate that word so much).

But hey! Listen to this double-CD, released by Cherry Red. It includes everything the man made, and you’ll be surprised by the timelessness of these tunes. For sure, they’re all made for the charts, but each is a gem. Explore if you dare!