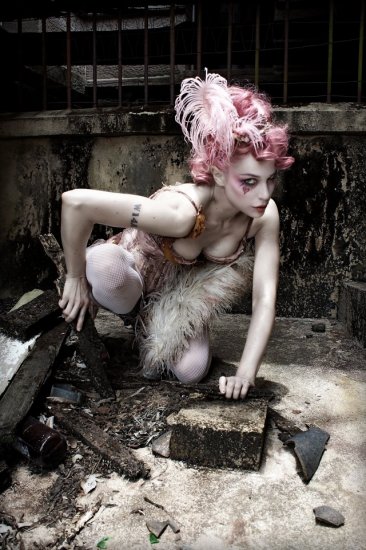 Beautiful, bizarre, first class cabaret super seducing girl and violinist extraordinaire. Known for her eccentric style and prodigious musical talent (she began reading notes before learning the alphabet and was already playing violin at four years old), Emilie spent her youth playing concert halls throughout the U.S. and Europe as a classical violinist before going mad, landing herself in an insane asylum and emerging as a rock singer with a murderous streak. And yes, she played and toured with none less than Hole. For those who want more: take a look at her interview and at the pictures who are also on our site. I loved the single 'Fight Like A Girl' from the start and still don't know why Lady Gaga is more popular than Emilie Autumn. Emilie has so much more to give and at least: she admits to be insane. 'Time for Tea' is another great song. On 'I Don't Understand' and 'We Want Them Young' you'll hear why cabaret is really her thing: telling a real story whilst walking around and bringing it with her heart. Bitter sweet is the least you can say about 'Goodnight, Sweet Ladies' (on which I can hear some Breath of Life singing). This is by far the best album I had to review lately and I hope the album will be picked up by a lot of people. Emilie Autumn really deserves your attention and support!

Next reviews
LUST FOR YOUTH • Growing Seeds
PARADE GROUND • A Room With a View
THE SILICON ARTIST • Windows On The World
TOBIAS BERNSTRUP • Sing My Body Electric
INDIANS IN MOSCOW • Indians in Moscow
ELEVEN POND • Bas Relief
SPEAR OF DESTINY • The Singles Collection
THE CRÜXSHADOWS • 21 july 2012 at The Steeple, Waregem - Belgium! 'The Dark Halo' - Tour 2012 Supported by: DISKONNEKTED, A THOUSAND SOCIETIES
• Review of the Amphi festival 2012 in Cologne (Day ONE)
ABSENT MUSIC • Absent EP