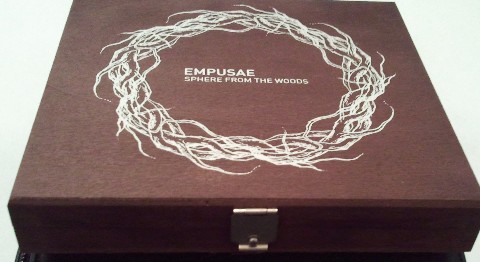 Sphere From The Woods

Going back to his roots, Nicolas Van Meirhaeghe again turns towards nature for his inspiration. And what else but one of the greatest, oldest and most massive lifeforms would suit his needs best. Yes, trees and forests have always been the source for great tales of lore and wonder. his latest album "Symbiosis" might have been a very personal work for him, but for me it never really worked like "Error 404" or "Organic.Aural.Ornaments".

And this new album sounds like he took elements from those two and distilled a new album out of it. Very slowly the songs unravel into stories of solitude. To set the atmosphere he uses a few field recordings, for instance "Into The Abyss Of The Forest" has footsteps on an old wooden floor. The remainder of the song stays very dark and minimal. Tribal rhythms are only used sporadic and never get the intensity of This Morn Omina songs, you only hear them in "Ritual For Saille", "Sphère Des Bois" and "Cadence Chamanique". And then only in the last part of those songs. "Dirge" has heavier drums

So if you like The Hatred Of Trees or Error 404, you will probably like this one. Too bad it's only repeating an old trick and not developing a new chapter in his Empusae body of work... Quality album, but you might as well relisten the aforementioned albums...