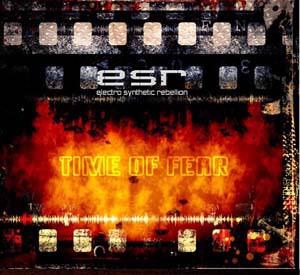 'No Tomorrow' has nice beats, a nice voice (computer reworked or via a vocoder), a bit a slow tempo, but the sound is very captivating! Whilst Love the retro sound. 'Time Of Illusions' has a more Suicide Commando sound and dito voice. 'Revolutions' is more synth minded, softer and nice. This song is almost like a VNV Nation song, except for the harsh voice (in the end you also get an extended version)! 'Everything is dead' is a slow one with a hypnotic piano & hypnotic synthwaves in it!
'They play/We lose' is a bit more up-tempo, with a harsher voice. Some Dj's might play this one during a party, love the sound! 'Raise your Fist!' is a great title with great lyrics. My only thing here is that I expected a more aggressive approach, but still: it's a nice song! Maybe an idea for a remix?
'Victory' is the kind of song to skip If you are me, it has no lyrics and is a more synth minded pop song with retro influences à la Technomancer. 'The Killing Game' & 'Instinct Of Survival' are - once again - nice titles, but once again I expected a more aggressive approach & harder beats. I can feel the high potential in it! 'Stand Up Now!' sounds like a mix between Project Pitchfork & Funkervogt! 'Mysterious Ways' is not a U2 song, but simply again just a musical piece, with no vocals (a skipper for me).

This band knows how to write about the not so happy sides of life and the negative sides of humanity!

Another thing that I noticed is the high potential! I think I'll love the next album more, just give them some space and time to evolve...