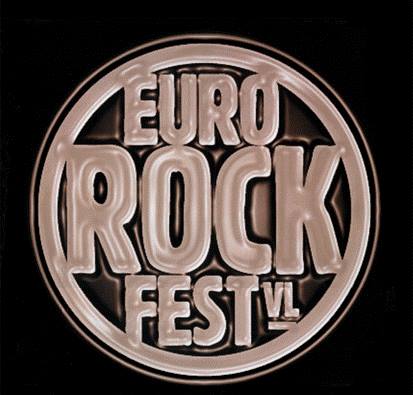 Eurorock is back! This cult/ electro /industrial and doom festival returns on the site where it all began in the early days, and sadly ended in 2002. After stopping all activities of the Dutch Summer Darkness crew and the bizarre ending of the Shadowplay Festival, the BENELUX has again his own great place to be for some dark alternative tunes.

The fresh started organization did their very best to put together a great line up with more than 40 bands. Although they said that it was almost sold out, we all had our doubts arriving at the festival site, along with some other, let ‘s say ‘ not so good organized things’, but I will come back to that later.

The first tunes I heard were from STIN SCATZOR started as a one-man-project by Stefan Bens. In 1990 he started out with only one keyboard, creating his own industrial/experimental music. But this band envolved and in 2001 Kris Peeters joined the band. I really liked their unique aggressive industrial sound, and as introduction to the festival it can count. Stefan gave a powerfull performance, but sadly for only a few dozen specators. (rating : 90/100)

Then IMPLANT, the project of Len Lemeire and Jan D’Hooghe, both contributed a lot to the huge Belgian electro scene since 1992 This band gave a nice performance, these guys always innovate modern electronical music by their diverse soundscapes. The mix of modern electronic melodies and industrial dance sounds enriched with some vocals, and they made a good impression with the crowd, and although only midday I saw already some dancing. (rating : 85/100)

Then the Italien ALIEN VAMPIRES, they acted with tons of provocation, but it was still to early for the clubbers to start dancing or jumping around so after a couple of songs it even became quite boring. Maybe this act can survive in a small club after midnight, but here it sounded more like a cheap suicide commando spin of (rating : 65/100)

XMH has built up a strong live reputation, and now it was time to show how the Dutch make a party. The energetic show of XMH never got boring, and from the very first minute singer Benjamin Samson was rampaging the stage like a madman, this guy will do everything to grab your attention! For those not familiar with XMH, their music is a blend of Industrial and EBM with a trancey edge. A pity there was not more audience to enjoy this strong set (rating : 90/100)

During the eighties LUC VAN ACKER was almost everywhere where exciting things happened: he was a member of British bands like Shriekback and Noise Abroad, toured for many years the U.S. with Revolting Cocks, played at Arbeid Adelt and kept there cutting-edge projects. Luc started of directly very strong with ‘The Ship’, and made quite an impression. Finally there were enough people to make this gig the first small highlight of the festival (rating : 95/100)

Followed directly by another Belgian Cult act, A SPLIT SECOND. This band already started its career in the mid-eighties , and was somehow the blueprint for the new beat movement, with of course tracks like ‘Flesh’ or ‘Rigor Mortis’, The guys did a great job, they impressed not only the nostalgia lovers, but also a whole bunch of young people with their energetic and danceable performance. For the first time the ‘Hell stage’ was on fire (rating 90/100)

ARBEID ADELT!, another Belgian cult band, already formed in 1981 by Marcel Vanthilt and Jan Van Roelen, and later joined by Luc Van Acker. Those guys still have it, the energy, power and craziness, with Marcel joking and fooling around. With their ‘hits’, ik sta ascherp en ‘De dag dat het zonlicht niet meer scheen’ they turned the stage into a madhouse, sadly the foreign audience didn’t always understand the Flemish parts and jokes. An absolutely crazy show, I really liked it , but not so sure for the ‘not Flemish’ audience (rating : 85/100)

DIARY OF DREAMS started as a Dark Wave band, and developed its style more to Electro / Synth Pop / Rock. In 1989 founded by front man and singer Adrian Hates, the band gathered with the release of their debut album in 1994 a continuously growing fan base. Nowadays, the Gothic/ Independent scene is unthinkable without this German band. The lyrics are alternately in German and English language. Like always they delivered an energetic set, and know how to impress the audience. I was completely overwhelmed and so was the rest of the audience, everyone started to dance and sing along. It seemed that many of us waited there just to see this band. (rating 95/100)

From this highlight over to THE CRUXSHADOWS and although the band is originally from Florida, USA, they are a well-known member of wave festival line-ups. The synth pop / Wave band with singer Rogue showed a lot of energy on stage and as usually had female dancers to support them. Although his voice is surely not what one might call clear and powerful, the band has a lot of followers and the space in front of the stage was pretty crowded. In my mind, the mix of synth pop with classical sounds by the violin was very new and fresh a decade ago, but now it all sounded far to smooth and commercial. I think this gig was completely on tape, at the end I had the impression I was watching a Eurovision song contest band ( rating : 50/100)

No, then the real thing, and another highlight for me was to see the Belgian project SUICIDE COMMANDO live again. With video projections and the support of a live drummer (Mario Vaerewijck) and keyboarder (Torben Schmidt), mastermind Johan Van Roy presented us an energetic show of Electro / Industrial sound. The mood of the crowd was excellent and thus you could see most of them dancing. Unfortunately there were some knee and voice problems, and sometimes you could even see he was in pain, but Johan did a great job, like always (rating : 90/100)

OOMPH! was founded in Wolfsburg in 1989 and is one of the oldest and most famous German bands.It consists of Dero (vocals, drums), Crap (keyboard, guitar) and Flux (guitars, sampling). On stage, they are supported by Silvestri (drums), Hagen (bass), El Friede (keyboards) and Okusa (percussions). Their music is called “Neue Deutsche Härte”, a powerful mixture of Rock, EBM, Pop and Metal, and has inspired bands like Ramstein. Oomph performed with German precision, a nice solid show that could enjoy a big part of the audience. (rating : 85/100)

The last band I saw on this first festival day was APOPTYGMA BERZERK, and the Norwegians gave their fans what they came for, a kind of greatest hits compilation, at first the atmosphere was really electrifying and it looked as if this was going to be another highlight, but people started leaving after some time so it ended without a climax. (rating : 75/100)

People told me they left because it was too cold in the tent. One of the things that wasn’t good organized, when you install heathers then please use them. More strange things on this festival were the bizarre decision to use the same festival bracelets for the first and second day of the festival , AND the tickets for both days!? It was 10 euro to park your car for the whole festival, but the dayafter they changed their mind and some had to pay again. And then the ‘joke’ that this festival was sold out, I guess on day one maybe 2000 people, certainly not the 6000 they announced. But OK, that are minor problems considering what was going to happen on day 2……

Below you can find a small compilation of most bands. More vids like always on my YouTube channel, numanoid65