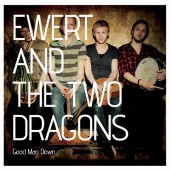 EWERT AND THE TWO DRAGONS

EWERT AND THE TWO DRAGONS is a fine Estonian band. So far they are really huge in their hometown and are trying to get outside of their playground. 'Good Man Down' is their second record and the first that is released on a larger scale.

I loved them from the very first listening; Their catchy, happy and very poppy sound still resonates in my head. I love the bass on the titletrack and find myself feeling very happy each time I listen to their work. Their second single 'Jolene' (an original, rather than a Dolly Parton cover) caught me too.

The acoustic start on 'Panda' sounds a bit like Dead Can Dance, very bluesy and lived through. EATTD sometimes reminds me of Novastar: 'Burning Bush' is a bit of a sad song, where the voice of Ewert takes you down. Burning Bush is a very intimate song too. The heavenly 'Sailor' took me on a deep trip way back. From then on, I just sat down and listened to the album and felt saddened when the last song 'You had me at hello' finished.

There are only 10 songs on the album, but I feels like I can have tons of these songs!

Next reviews
THE BREATH OF LIFE • Whispering Fields
CRUISE [CTRL] • …Are Not What They Seem
PROMONIUM JESTERS • EP 2010
IN MY DREAMS • XII Reasons To Remember
DIRK GEIGER • Elf Morgen
• The Human Centipede II
DEATHCAMP PROJECT • Well-Known Pleasures
MARILLION • Best.Live
• Review of the Amphi festival 2012 in Cologne (Day TWO)
A RAINY DAY IN BERGEN • A Rainy day in Bergen