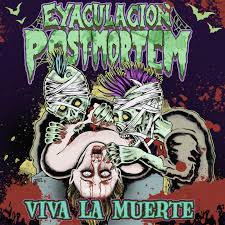 Eyaculacion Post Mortem are a Catalan singing batcave inspired deathpunk band. Viva la Muerte is their third release after an album and a later EP. It relies on synth, vocal distortion and sampling to add a creepy clowns-funeral sound to their music that would be at home in any 80’s horror movie. In fact if I play this before bed I was almost guaranteed to be allowed to be big spoon with my girlfriend who hates horror movies... which is about the best complement I can give to the atmosphere they create.

There are 18 tracks of mostly fast deathpunk/batcave, but the band mix things up with a few tracks like the slower synth sounds of tracks like Morid Hijos de Puta (Die Mofo’s),Brutal Drogo the bands Sisters of Mercy-impression, some gothabilly and Antidisturbios en el Cementerio (Riot in the Cemetery) which sounds like Funker Vogt with guitars. There is even a mouth pick in at least one of the songs for country music fans.

The only thing I’m not mad on is the drum machine, which is a bit invasive, sounding about as natural as Pamela Anderson’s tits in Baywatch. They’ll be playing at return.to.the.batcave.pl in October, so get your copy so you can practice your lip sync.

Same genre: GOTHIC
THE BIRTHDAY MASSACRE • Fascination
DARK • Nightmare
ANTHONY JONES • Farewell To Flesh
JESU • When I Was Small
DAVID J HASKINS • Missive To An Angel From The Halls Of Infamy And Allure
VARIOUS ARTISTS • DARKSIDE OF THE CON III
THE SISTERS OF MERCY • First And Last And Always
ALIEN VAMPIRES • Evil Twin Ep
SIOUXSIE AND THE BANSHEES • Juju
VIRGIN PRUNES • Hérésie