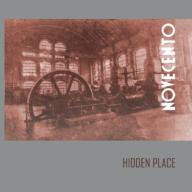 What’s that in 2013? After the excellent new album by Mesh I have the feeling that I have discovered another cd which probably will make it in my top 10 of the year. Right, there are still 10 months to go and it’s true that I’m totally in love with Italian wave, but despite all this: Novecento is an absolute killer.

Already from the opening moody intro Radio Avanguarda you hear that this will be darkwave par excellence. There are those melancholic guitars that are similar to those which are used by Clan Of Xymox on their early recordings. With this in mind you already have to be convinced that Novecento will be a little masterpiece, and no, it’s surely no coincidence that this album is released on Calembour Records, the label from The Frozen Autumn.

Off And On has an irresistible minimal synth-sound which makes you wonder if these guys (and girl) aren’t fans from Absolute Body Control. And if this ain’t enough there’s also a track like Fuochi Fatui which is pure Kirlian Camera and on Stunning Art there’s even some stylish futurepop to be heard, or what about those godlike Cocteau Twins-guitars on Ermione?

You see, we can relate every song to something stunning. Perhaps Hidden Place might not be the most original band around, they definitely choose the best sound.

Fans from The Frozen Autumn will be delighted to know that Froxeanne is doing the vocals on Legendary Divers.

Hidden Place have released a perfect darkwave-album which is produced by Jean-Pierre Mercier by A Handful Of Snowdrops, the cultband that always has been compared with Clan Of Xymox. A fact that says enough.

A band to discover. To be filed under magnificent!